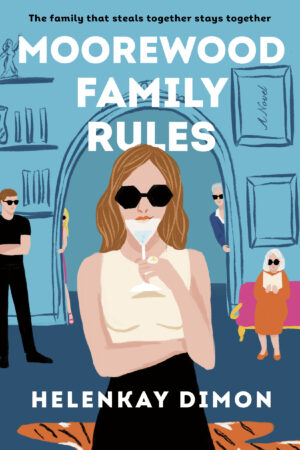 Do you have more info about this edition? Contact the web team.

Knives Out and Ocean’s 8 meets The Nest in this hilariously twisty novel by award-winning author HelenKay Dimon, about a woman who returns home from prison to her dysfunctional con artist family and tries to get them to go legit.

One day a con man met an heiress, wooed her, married her, had two kids…and kept on conning. Jillian Moorewood is the oldest child from that meet-cute-gone-wrong marriage. The stable one. The sensible and dependable one. The one who protects and fixes. The one who went to prison to save their sorry butts. Now, thirty-nine months later, she’s out and she’s more than a little pissed.

Finally home she finds the scheming clan in full family fleecing mode. They all claim they didn’t really agree to Jillian’s previous go-legit-or-else ultimatum before she went away. They viewed it as a “suggestion” then ignored it. So, business as usual. But Jillian is done with the lies and fakery. She demands the whole messed-up crew clean up its act, and this time she’s not kidding—she has the leverage to make it happen.

Problem is, her life is in shambles, but with the help of a great aunt (crooked but loveable), a bodyguard (who is a nice surprise after three years in prison), and a few allies (all working undercover), Jillian starts to put her life back together. She kicks out a few mooching relatives living under her roof, sets limits on everyone’s access to the money, ducks from their various attacks, and sees if that bodyguard is maybe interested in sticking around for a while. For the first time, she’s Jillian Moorewood, her own woman, and she’s ready to figure out who she is.