Book 3 in the Tough Love Series 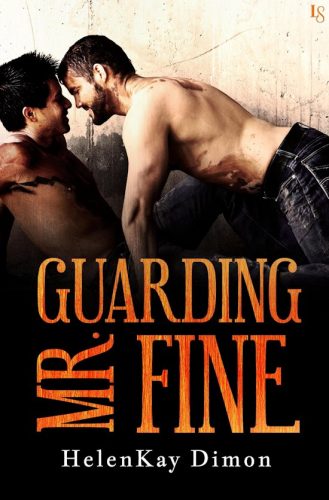 In this steamy novel of seduction and international intrigue, two brave men are stripped of their defenses—and exposed to dangers and desires that simmer below the surface.

As an agent with the CIA’s special activities division, Seth Lang lives for risk—and yet he’s stuck playing bodyguard to the U.S. consul general in Munich. Although Seth’s last assignment nearly killed him, babysitting some desk jockey in a suit sounds way too easy. But when he lays eyes on the new top man, tactical expert Rick Fine, Seth’s thrilled to see just how hard this job is going to get. Mr. Tall, Dark, and Quiet has a body worth guarding—and he requires hands-on attention day and night.

Dispatched to a German consulate to expose the murder of his predecessor, Rick finds himself in an extremely vulnerable position. He needs a man like Seth—in so many ways. This mission will inevitably plunge them both into jeopardy, but each new threat only brings them closer. Rick just hopes that he can keep his deepest, darkest secret hidden—or else risk imperiling a relationship they’re both fighting for their lives to protect.

Book 3 in the Tough Love Series

is Book 3 in the Tough Love Series 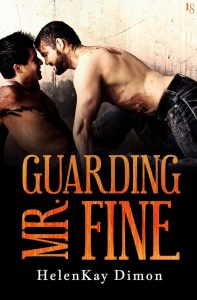 Seth Lang wanted out of Berlin. He had the itch to get back in the field. Focus on planning, waiting and executing.

None of that was going to happen. He could also forget going to the States or heading to Paris, his usual blow-off-steam spot. He’d pulled a crap assignment. The kind members of the special ops division of the CIA dreaded—babysitting a diplomat. In this case, the new U.S. consul general to Munich, Germany.

Boring shit. He’d almost rather take a vacation. He hadn’t had one of those in four years unless you counted that time he was in a coma. His boss insisted it absolutely did not count. Seth wasn’t convinced.

This was a mandatory stand-down. After helping to uncover and disband an international crime dynasty during his last op, his superiors handed him an easy draw, one where he wouldn’t get shot at every single minute. For some reason they viewed that as a reward. He didn’t. He despised soft assignments.

The idea of playing bodyguard made him want to punch things. Not that he had a choice. So, shadowing some newbie foreign service officer was it for now . . . unless he died of boredom. He was pretty sure that was a thing. He’d find out in three days when he started the new job.

Until then, he needed to escape the hotel room and get some air, which was why he landed in this club ten minutes go. Two marines at the embassy had told him about it. Insisted he could get a drink and relax. They even invited him to come out with a group but he passed. Waited until he thought they’d be gone for the night to check it out. Now he was.

He grabbed his beer and turned away from the bar to survey the noisy club. He could sum it up as stone walls, dark furniture and a shiny glass bar. People lingered in every corner, every inch. Standing, sitting, swaying to the music that blared loud enough to make him want to scream get off my lawn. Not that he’d ever had one of those. He’d been on the move ever since joining the CIA’s Special Activities Division.

He’d managed to date the same woman for four months, a record for him, but it ended months ago when she couldn’t separate the idea of him being attracted to all genders from the possibility of him cheating. She didn’t care that he got shot at for a living or that he wallowed in danger. Nope, his bisexuality scared her.

That shit got old fast.

He wasn’t looking for anyone or anything tonight, but he wouldn’t turn down an opportunity to get his heartbeat racing. If he couldn’t burn off the excess energy working, he’d burn it off the horizontal way.

He glanced around as he sipped his beer. The layout of the building turned out to be pretty simple. A space for dancing and eating upstairs. A slightly quieter section of darkened rooms at the bottom of the stairs. Not exactly secure in terms of having a quick exit, but he was off duty so he limited himself to a cursory check.

The prickly sensation caught him by surprise. He’d know the feeling anywhere. Being stared at, but this time it came without the usual promise of pain and brutality. The energy suggested interest, not attack.

His gaze zipped around the room and landed on the man in the corner. Seth had spied him when he did his usual informal surveillance upon entering a space. The guy’s head had been down then as he studied his phone, but not now. No, the guy was fully engaged and openly staring.

Seth liked a man who knew what he wanted.

He also liked what he saw. Short dark hair. This one had skipped the clean-shaven routine and went with a touch of hair around his mouth and chin. He possessed a laser-like stare. Add to that the kick of interest he didn’t bother hiding and he had Seth’s full attention.

This guy had the whole sexy-nerd-with-broad-shoulders look down. Buttoned-up dress shirt with a tie. The dark glasses. The combination seemed to be kicking Seth’s ass.

And smoldering. Yeah, the guy had that down, too. Drank his beer and watched Seth while he did it. Didn’t break eye contact. Didn’t play games. An unblinking stare. Long fingers loosening his tie. Bend the guy over a table and Seth would have sworn he’d fallen into the live-action version of one of his fantasies.

Apologies to Berlin. Apparently he was looking for something tonight, and he’d found it.

Seth didn’t debate the pros and cons of walking over and checking him out up close. He was definitely going in.

He pushed off from the bar and stalked his way through the groups of people who moved in and out, temporarily breaking his line of sight on this guy. The crowd cleared as Seth reached the table. It fit a large group, yet this guy sat alone. Weird, but Seth had done weird. That didn’t dissuade him.

The room thumped from the music playing upstairs. The beat and the talking merged into a loud crescendo. It amounted to nothing more than a rumble in Seth’s head as the stranger looked him up and down. Looked then nodded to the seat across from him.

“So . . .” Seth brushed his hand over the table in front of him then leaned his elbows on it. “Ich spreche nur ein wenig Deutsch.”

“Well, if you only speak a bit of German, let’s go with English.”

Seth didn’t pick up an obvious accent, so probably an American. “What’s your name?”

Blue Eyes laughed. “Does it matter?”

“Not a bit.” Good, this guy knew the drill. Seth was really starting to like the club or bar or whatever the hell it was. “You want another beer?”

The guy shook his near empty glass. “You offering to buy me a drink?”

Deep voice. Wasn’t staring at a photo of his mother or wearing snowman pajamas. All good so far, so Seth pushed forward. “It seemed like a better line than asking you what you’re doing here, drinking alone.”

Blue Eyes glanced around at the empty chairs. “I was with people but they headed out for another club. I passed.”

“Not a follower then.” Seth liked that, too.

He did a quick visual assessment. The guy didn’t appear drunk. If he had a weapon, he hid it well because his hands were folded on the table in front of him and the white dress shirt fit nice and snug over that chest. No room to hide anything under there, but Seth was happy to pat him down to double-check.

He ran through his mental checklist to see if this guy ticked a memory or raised a flag. Nothing.

“I’m in the city for a few days before heading out. The idea of hitting a bunch of clubs struck me as . . .” Blue Eyes winced, as if searching for the right word.

Seth had one. “Desperate?”

That’s how he saw his own visit. He figured it might apply to this guy as well.

Blue Eyes didn’t appear offended. His crooked smile and the intelligence written on that face didn’t fade. “Speaking of which, why are you here, drinking alone?”

“I wasn’t really looking for a party.” Seth hadn’t been looking for much of anything other than a way to burn off a few mindless hours. Drinking sounded better than reading the thin file about his next assignment. He had a few days for that.

Blue Eyes wrapped his fingers around his glass. “What were you looking for?”

No wedding ring. No telltale mark of one he’d removed. Seth leaned back in his chair. He could almost hear the green light click in his head.

Now he needed to know that the interest ran more than one way across the table. “I figured I’d know when I found it.”

Not quite the response Seth hoped for, but he didn’t scare off easily. He also didn’t mind taking the lead . . . in fact, he preferred being in charge. “I’m thinking you might be it.” 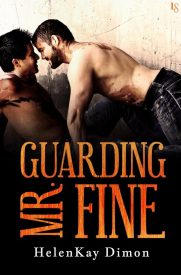 If you haven’t read anything by HelenKay Dimon this is the perfect starter story for all m/m fans and I really can’t wait to see what she brings us next!

[I]f you are in the mood for a fast-paced, super-sexy, romantic suspense story, look no further than Guarding Mr. Fine!

Usually, the story is all about the chemistry between the two males and yada yada yada. But this? This is amazing!

[I]f you are in the mood for a fast-paced, super-sexy, romantic suspense story, look no further than Guarding Mr. Fine!

I loved the intrigue, the adventure, and the chemistry between the two leading men.

HelenKay Dimon is a master writing sexy, suspenseful, black-operative special-agent stories and I love the action-packed drama that ensues and stays within the pages from start to finish.

This book had it all and you definitely need to put it on your TBR list!

Dimon writes super sexy stories with a nice thriller angle. If you are fan of romantic suspense, definitely check these out.

Guarding Mr. Fine is filled with suspense, thrills, humor and plenty of steamy scenes. And in case you aren’t familiar with this author, she knows how to write M/M romance, when I want to read this genre she’s one of my go to authors.

This book was so, so good. Seriously, I’d love to sit down and re-read the entire book right now.

Guarding Mr. Fine by HelenKay Dimon is a deliciously captivating romantic thriller. If you enjoy bodyguard romance novels, this one should be on your list of books to read.