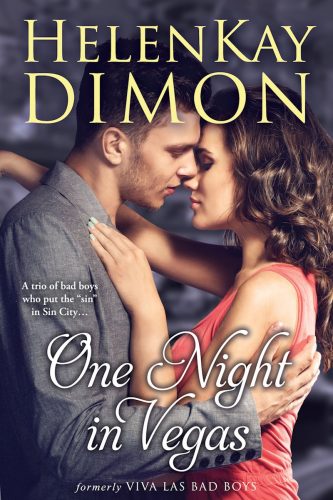 Jack McAllister is looking to get lucky on his vacation, and the jilted bride sitting at the slot machine next to him just might be his answer. Getting her up to his room is a breeze. Ditto getting her out of that formal, white dress. Laine Monroe isn’t a bride at all. The pretty blonde accountant is playing P.I. to help a client she’s sure Jack conned out of his money. But now that she’s got him in a compromising position, she finds he’s all too willing to compromise…

Jenna Barrister didn’t get to where she is in the business world by being a pushover. So how exactly did she end up here, playing corporate babysitter to playboy super-chef Zach Jacobs? This is one MBA who isn’t falling for his “speak naughtily and carry a big spatula” routine. But when the lights suddenly go out in the hotel, Jenna’s resolve crumbles. She wants to experience the heat, and the rebellious chef knows just how to turn it up…

As the casino faces its first blackout, Assistant Manager Alex Mitchell figures there are worse places to get stranded than in the soon-to-open spa with a mysterious and sexy guest. Hey, what happens in the massage room, stays in the massage room. Travel reviewer Caroline Rogers has road-tested plenty of places, but she’s never had a steamy, four-star experience like this one. She should confess her secret, but who knew mixing business and pleasure could be this much fun… 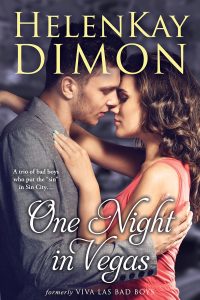 Jack MacAllister smiled at his companion of one hour. “I’m not a great believer in luck.”

“Better not let the Vegas tourism folks hear you say that or you’ll have a date with a bus going straight out of town.”

Actually, his only date for the evening had been a blackjack table. Until she sat down. A sexy blonde blessed with a sweet round face and the husky voice of a telephone sex operator. The same woman wearing a big white wedding dress.

A rule probably existed somewhere that said harmless flirting was not so harmless if the woman in question happened to be a bride. Someone else’s that is. But he wasn’t ready to believe this one even was a bride. Something about this lady’s story didn’t fit. The attitude, the lack of excitement. The absence of a groom…

If she weren’t so damn sexy, he’d run for cover in any direction that included a bar. But that wasn’t happening.

About fifteen minutes ago she looked up at the big screen television in the nearby betting area and started spewing out college football statistics. Exactly ten seconds after that he fell deep into lust. His ass hadn’t moved since. If there was anything hotter than a woman who knew about sports, well, he didn’t know what it could be.

When she moved to the rows and rows of shiny flashing slot machines and asked him to join her, he did. He even kept up the pretense of polite conversation by wasting a hundred dollars in less than fifteen minutes on slot play.

After all that time watching her, he still didn’t know her story. He knew how her shoulder-length hair bounced against her slim shoulders when she laughed. He knew how her grass green eyes sparkled with excitement when the reels rolled her way. He knew because his sorry ass had been stuck on the same uncomfortable stool forever watching her nurse a twenty-dollar bill and eighty credits.

But her wedding? The groom? Nothing. Not one word.

She said something, but he lost the thread when a group of what could only be described as Beautiful People stepped out of the Bentley Hotel and Casino elevators squealing at a decibel level he’d bet would shatter glass. The women, all with straight hair and even straighter bodies headed for one of the many bars outlining the gambling area.

“Very pretty. Your type?” She did some shouting of her own to be heard over all that giggling.

“They look hungry to me.”

His gaze returned to her companion and wandered over her petite frame. She was compact, with full high breasts. Even under the sharp yellow lighting he could see the healthy glow to her skin.

“Where do women get this crap?” he asked.

“You’re not going to blame men, the media and the evils of advertising?”

“There’s enough blame to go around, but women are the worst.” She looked past him. “Speaking of blame.”

He looked over just in time to see a tourist dragging a suitcase the size of a coffee table slam into a tall, useless-looking guy in a tux. Casino employees dressed in burgundy blazers swarmed the scene.

“That can’t be good for business,” she said.

“Alex has it under control.” A low rumble of background noise filled the air as men and women puffed on cigarettes and grabbed up free booze as if security guards weren’t engaged in the equivalent of international peace talks in the middle of the floor.

She shrugged right back in an exaggerated style that made him laugh. “You visit enough to be on a first-name basis with the guy who runs this place?”

“Let’s just say Alex is the type to give a personal welcome to frequent guests.”

“I come here whenever I need to clear my head.” Time to steer the conversation to neutral ground. She didn’t need to know about the size of his bank account or the huge decision facing him back at the office. “With the new construction, the shutting down of part of the pool deck and all the other inconveniences that go along with expansion, Alex is doing everything he can to keep the patrons happy.”

Not the most observant woman he’d ever met but certainly one of the more attractive. The kind of attractive that translated just as well in the bedroom as in every other room of the house.

“You didn’t notice the second tower going up right behind this one? The big crane?”

“Guess you prefer indoor activities.” He loved those type of activities.

A bell started dinging behind him, reminding him there were a few things about Vegas he didn’t love. Things he actually hated. Specifically, slot machines. He despised all that ringing and shrieking whenever anyone won a measly ten bucks.

“Maybe we should try another game. One that actually requires a level of skill higher than picking lottery numbers,” he said.

“This machine is going to hit.”

Since her eyes sparkled with hope, he almost hated to shoot her down with the truth. He tried anyway. “I hope you’re kidding.”

“No, really, I can feel it. Gambling isn’t usually my thing-”

“So, naturally, you came to Vegas.”

She ignored him and rambled on. “I’ve been within inches of hitting progressive a few times.” She pointed at the screen. “I just need the circle with the big B to land on the line next time. It was just below the line last spin.”

Great. A novice. “You know it doesn’t work like that, right? It’s all chance. There’s no skill involved. What happens one spin has no bearing on what happens the next. It’s all based on a series of numbers-”

“I’m as fiscally responsible as the next person. More so, really, but this is different. Don’t ruin my fun.” She had one hand wrapped around the neck of a beer bottle and the other gripping the slot pull as if she’d fall through the floor without the thing to support her.

“Far be it from me to ruin your day with a little realism.”

“Good man.” She gulped down a mouthful of beer.

If she were going to pickle herself, he should at least have some biographical information to tell the ambulance crew. “You still haven’t told me where your groom is.”

She stopped in mid-swig. “You didn’t ask.”

Oh, he was sure he had. Twice. In between the part where he imagined she was wearing skimpy pastel lingerie and the part where he peeled them off her inch by mind-blowing inch. She ducked the question both times. 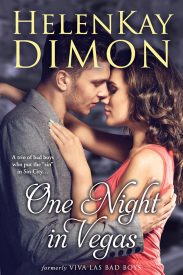 Dimon has a clever way with humor and sexual tension, and the simultaneous timelines of the stories are ingenious.

A perfect book to tuck into a beach bag, fans all but certainly won’t be disappointed.

…a charming, explosive anthology about what can happen, and does, when the lights go out…It’s one you don’t want to miss.

Viva Las Bad Boys! is a laugh-a-minute collection with plenty of heart to counter all the sizzling passion.

HelenKay Dimon always gets it right with the greatest, sexiest, hottest stories around, and VIVA LAS BAD BOYS is no exception.