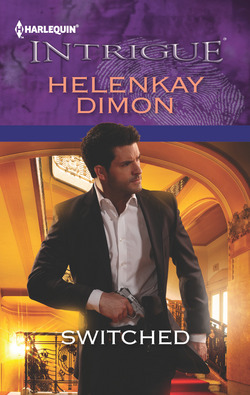 A CASE OF MISTAKEN IDENTITY…

For Aaron McBain, it was just another routine job, protecting his client at an office Christmas Party. Until commandos stormed the place and took a hostage. But they had the wrong woman… the very woman Aaron has started dating — under a different cover.

Risa Peters couldn’t convince the gunmen she was the wrong hostage, nor could she believe her so-called “tax attorney” boyfriend wrested her away. But as threats against her escalated, Risa and Aaron found themselves trapped in the building in the midst of a deadly conspiracy. And only her sexy new protector — a man she hardly knew but already wanted — stood between her and a bullet. 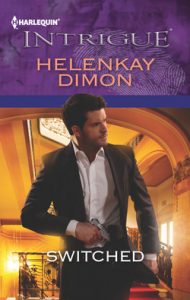 Risa Peters clutched her portfolio to her chest and leaned back against the elevator wall. This was the last time she’d choose a holiday party venue based on a throwaway recommendation during a dinner date with the lawyer she’d seen exactly twice. The same dinner date who failed to call after their last meal together. Since it was already Thursday, she figured the man was on the run, which was a shame because the chocolate brown hair, bluish green eyes, all-handsome type appealed to her.

So did the Elan Conference Center. She was only able to book it for an afternoon during the busy season because the place wasn’t truly open to the public yet. The center was in the middle of something called a soft opening. The official ribbon-cutting would come in mid-January, after the holiday rush subsided. For a discounted fee and an agreement to forgo some of the more expensive conference and party extravagance, Elan agreed to host the party on very little notice…at an increased price.

Risa doubted the office budget would support the place next year when the amenities hit their stride, but she could enjoy it now. The miles of rolling hills and long winding drive up to the place sparkled even more in real life than they did on the website. So did the sprawling five-story building with the stone façade and the huge double door, double height entry.

It would all work so long as the weather held out. One flake of snow and next week’s party would turn into a driving hazard.

Not that any of this – the late planning, the distance or the weather – qualified as being her fault. Oh, no. She’d been in her job position all of three weeks when she realized the woman who used to be the office manager, and now held the title of fired former office manager, at the engineering firm failed to reserve a place for annual holiday get-together. Since the engineers liked to party, the oversight bordered on catastrophic. So, Risa was here today to scout the center out and make sure her choice had been a good one then sign the agreement and hand over a check.

If she survived this mess-up, pulled the party off and got all the engineers home without a drunken episode, she’d still have a job next week. And she sure needed the job. Without it she’d never pull herself out of the economic tailspin Paul threw her into.

When the elevator doors opened, she almost stepped out of the car. A quick glance at the glowing green number on the panel told her she’d only made it to the third floor. One more to go.

She stepped back just as a beefy hand reached into the open space and jammed the doors before they could close. Two guys with black jackets and shoulders that combined spread the width of the car slid inside. They hugged the front of the elevator but the walls still closed in on her.

She knew the lights didn’t dim at their entry but everything seemed darker, felt colder, than it had a second before. It was as if the air sucked out of the car as they moved in.

They didn’t look at her. Didn’t speak. But the way their combined bodies blocked any chance she might need of a quick exit had her nerves jumping around in her stomach.

She counted the seconds until the car moved again and stopped on the fourth floor. In her head she reached a thousand but she guessed that was some sort of sick mind trick. Still, when the bell dinged, she shot between them, her hands shoving them apart.

“Excuse me,” she said over their surprised grunts.

Then she walked as fast as she could without breaking into an all-out run. A few fast steps and she turned the corner. With her back slammed against the wall, she listened for the two hulks to make sure they didn’t follow.

When silence echoed back at her, she inhaled. The sharp smell of paint assailed her nose. A quick glance told her she was alone on a newly constructed floor. Protective paper and painter’s tape still covered some of the doors.

“Great.” She sucked in as much of the tainted air as she could take in an effort to slow her hammering heart.

Only then did she feel the tiny jabs against her skin. She opened her palms, peeling her fingers away from the tight clench on the leather binder between her shaking hands.

She wasn’t the spook-easy type, having learned long ago that some of the most dangerous men in the world didn’t lead with their hands or fit into the Neanderthal body type. But she wasn’t stupid. Any smart woman would experience a choke of vulnerable panic being trapped alone with those two bruisers on an enclosed elevator.

She walked toward the restroom sign but stopped when she saw the note on the door. “Out of Order. Use 5th Floor.”

Her residual panic skittered away. Frustration took its place, shaking through her with the force of a runaway truck. It wasn’t bad enough the conference manager got stuck on a call and sent her up ahead. Now she had to wander around looking for a restroom.

She glanced at the elevator then at the emergency stairwell to the left of the bathroom. She’d take her chances on the stairs this time. With her navy pantsuit and terror fueling her steps, she could run. In an elevator, she’d have nowhere to go.

She hit the stairwell and let her pumps click against the cement steps as she traveled up a floor. A quick peek through the small slit where she opened the door showed nothing but a carpeted hallway with an abandoned industrial shampooer against the wall. The doors weren’t even on the hinges on this floor.

She waited for any sign of life, any noise. When the floor remained quiet, she snuck into the ladies restroom and let the door softly shut behind her on a swish.

With her palms flat against the fancy quartz sink, she stood still and let her breathing and heart rate dip back into normal range. As she pivoted for the stalls, the main door flew open. A blur dressed in black raced toward her. Before she could scream, hands clamped down on her arms and the figure shoved her hard against a stall door and back into the enclosed area. She only stopped when the back of her legs hit the toilet.

When her brain kicked back into gear, her arms and legs started moving. Her attacker’s hand settled over her mouth even as she shook her head to avoid him.

“Stop. I’m here to help.” The harsh whisper bounced off the tiles as he crowded around her with his focus centered on the room’s door.

One more step and her back hit the far stall wall and her head came up. If the guy wanted to hurt her, he’d have to watch her as he did it…and be on the receiving end of a battle of a lifetime.

The air gathered in her lungs for a bite and then a raging scream as she decided to go for his face. When he turned back to her, the breath rushed out of her as fast as it came.

Her brain cells sputtered to a halt. “Aaron?” 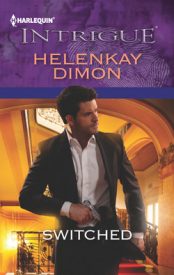 Who can say no to a hot, banged up hero, humor and some pretty tight pacing?