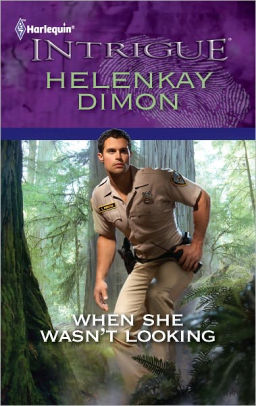 No woman could deny the appeal of the sexy deputy sheriff Jonas Porter. But to Courtney Allen, Jonas has one major flaw-his badge. Years ago, Courtney’s father was wrongfully convicted of a crime and she vowed to never trust a cop again. But when Jonas becomes the only man to believe in her father’s innocence, Courtney begins seeing the brooding lawman in a whole new way.

Jonas knows in his gut that the real killer is still out there and determined to finish what he started long ago. To protect Courtney and bring the criminal to justice will require all the skills he can muster. And that means focusing on the job. Not the woman who makes him forget his troublesome past and arouses in him a passion that is anything but professional. 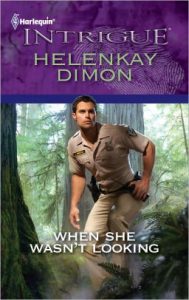 Jonas Porter yawned as he marched up the front porch steps to the craftsman-style bungalow in the middle of nowhere. At ten in the morning he’d been on shift for more than sixteen straight hours thanks to the Webber kid taking his neighbor’s car for a joyride that ended with a big splash into the Siuslaw River.

When he took the law enforcement position, Jonas had been promised relative peace and quiet by the county sheriff and Jonas’ long-time mentor, Walt Roberts. Since Jonas needed a break and crime didn’t run rampant in Aberdeen, the small Oregon town where the river dumped into the Pacific Ocean, the job looked like the perfect solution. If a drunk pre-teen with a lack of common sense turned out to be the biggest problem, Jonas could live with that.

Agreeing to handle one small task on his way back to his place to pass out was probably not his brightest move. He needed sleep, but this should easy. In and out and then he could slip into bed for a few hours.

He knocked on the dark red door. The rock beat thumping inside and shaking the walls cut off. He double-checked the house number to make sure he was at the right place. He expected an older lady, a grandmother type. He guessed this one liked her music loud, which blew his older-woman stereotype apart.

In the resulting silence he waited for someone to open up. When no one did, he raised his hand to try again and nearly punched the woman who threw the door open.

“Sorry.” He mumbled as he stared into big brown eyes filled with a wariness that appeared older than the rest of her.

“Yes?” Her smile faded when her gaze traveled down his chest.

A guy could get a complex. “Ma’am, is this your house?”

The high cheekbones and slim figure didn’t make any sense. Young and pretty with shoulder-length brown hair and not at all the lonely older woman he’d been told to check on. This one couldn’t be more than in her mid-to-late twenties. She wore a slim long-sleeve red t-shirt, and if his guess was right, no bra.

He pretended not to notice the last part. “I’m Lieutenant Jonas Porter, the deputy police chief.”

“I got that much from the uniform and nametag.”

“Uh, right. Sure.” She had him stuttering like the Webber kid.

“Why are you here?” She wiped her hands on her olive cargo pants but didn’t shift one inch to let him in.

Young or old, she hardly struck him as a woman who needed police assistance to make sure she took her medicine on time. This one could handle her business without any help from him. The flat line of her mouth and clenched fists suggested she wanted to kick him right off the porch.

Something flashed in her dark eyes. “What are you talking about?”

Her grip tightened on the door. “My husband?”

“Yes, ma’am. My understanding is that he’s away from home on business.” When she continued to stare at him with that you’ve-lost-your-mind expression, Jonas tried again. “He called a friend who called the police in Maryland who contacted my office. I’m here as a courtesy.”

Seemed she had a repetition problem. “Yes, ma’am. Your husband was worried you’d forgotten to take your medications.”

“You think I need drugs?”

Jonas refused to be thrown off stride. “Your husband said something about a bad fall recently.”

That’s what Jonas was starting to wonder. “No, ma’am.”

“You obviously have the wrong person.” She started to close the door. Right in his face.

He caught the edge with one hand as the other went to the top of his gun. “Hold up.”

The move was pure instinct. He’d once waited a second too long and vowed never to make that mistake again.

She didn’t miss the move. Her gaze zipped to his weapon. “Excuse me?”

“Let’s calm down for a second and walk through this.”

“Do I look nervous to you?” 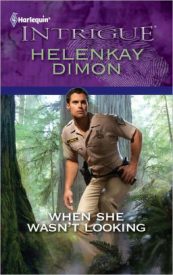 Between the explosive action, snappy dialogue, sizzling attraction and intricate plot, Dimon’s got a tour de force tale of greed and revenge.

I adore Dimon’s writing style, her voice, and the fact that her heroes come across as real.

Recommend to any reader looking for a romantic suspense that will keep you reading and tug at your heart.