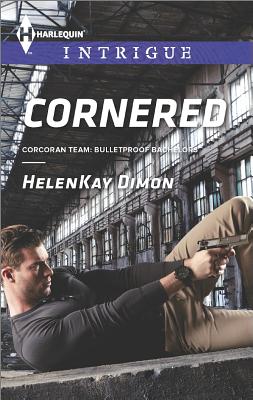 Undercover agent Cameron Roth’s hot on the trail of a drug-running crime cartel. The last thing he needs is to involve an innocent woman in the cross fire. But when he leaps into Julia White’s home for safety, she becomes part of the tangled web Cam’s trying so deseparately to unravel. Smooth, solid Cam’s the consummate professional. But gorgeous, feisty Julia transforms the high-stakes assignment into something far more than business as usual. Now that the villains have her in their sights, Cam’s got to not only solve the case—but also protect the only woman who’s ever found the way into his heart.

is Book 1 in the Corcoran Team: Bulletproof Bachelors 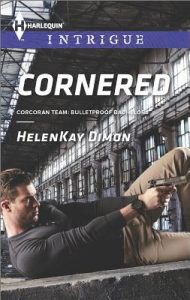 She made it two steps before shots rang out again, this time multiple and in bursts. At the sound of the rapid rat-a-tat-tat, she spun around, trying to judge the distance between her and the bullets. Her gaze zipped from one end of the open yard to the other. A thunder of noise she couldn’t identify filled her ears and grew closer as she scanned the part of the two acres she could see without moving away from the protective shield of the house.

A tangle of trees blocked her view to what lay beyond her father’s falling-down property, but she didn’t hesitate. Living in Seattle for the last two years had taught her one thing: don’t invite danger. That meant moving. Smart women knew when to run.

She took off for the back porch as she tapped the pockets of her cargo shorts in search of her phone. Empty. Maybe that was for the best, since what passed for police on the island didn’t exactly fill her with a sense of security. More like dread.

Her foot hit the bottom step right as the hair on the back of her neck stirred. That only made her jog faster. Anxiety rocketed through her as she reached for the door. Just as she tugged she heard it—heavy breathing, and not hers. She whipped her head around in time to see someone barreling toward her. Broad shoulders and big. Male and fast.

Her hand slipped on the knob, but she turned it. She managed to open the door an inch before a man’s hand slammed against the frame by her head. The heat from his body radiated against her back as panic swamped her. She opened her mouth to scream, but a hand clamped over her face, blocking the sound.

“I’m not going to hurt you.” The harsh whisper brushed across her ear.

Yeah, no way was she believing that.

She kicked out and shoved. Flailed and tried to run again, this time for the tree line. She would not go out like this. She’d always joked that if she stayed on Calapan she’d die. She refused to let that prediction come true.

She elbowed him in the stomach and heard him swear in response. Another shot or two like that and she might be able to put some distance between them and get inside. Gathering all her strength, she drew her arm forward again and pushed back. She hit nothing but air.

One minute she stood locked in an epic battle on the porch. The next, her attacker reached around her and got the door open. He propelled her forward, slamming the door behind them and locking them both inside.

He held up his hands as he stared at her with big blue eyes. “Please listen to me.”

He could beg all he wanted. The dimple, those shoulders, the objective cuteness…she wasn’t buying any of it. She’d never been charmed by a handsome face before and wasn’t starting now.

If he wanted a fight, fine. She’d give him one. Without thinking or analyzing, almost on autopilot, she ran for the small family room on the far side of the kitchen. Guns didn’t scare her, because they were a way of life on Calapan. Growing up here, she’d learned how to shoot. Cans, mostly, but she didn’t plan on telling her attacker about that limitation.

Footsteps beat in time with hers. She ran. He stalked. He kept talking—something about needing her help—but she blocked it all out, her only thought being to find that rifle. There was a Glock around here, too.

Not likely. She put a couch between them as she tried to remember where she had left the guns after she moved them around this morning. Her mind flipped to the fireplace, and a quick glance revealed one leaning against the mantel. The same fireplace mantel next to the attacker and not her.

Her mind raced with directions. Draw him out. Let him talk. She skipped all of it. “Get out.”

“I will not hurt you.” He hadn’t lowered his hands.

That didn’t mean he couldn’t. Her gaze dipped to the gun strapped to his hip and the trickle of blood running down from the edge of the sleeve of his navy T-shirt. “Then leave.”

“My name is Cameron Roth.”

As if she cared. “Fine. Leave, Cameron.”

“I work for a group called the Corcoran Team.”

She didn’t even know what he was talking about. Her mind stayed focused on the gun, the blood, the shots and the fact that a stranger stood in front of her. The combination was all her brain could process at the moment.

“I don’t know who this team is, but you can go find them.” She bit back the tremble in her voice and tried to get the words out as quickly and clearly as possible. “I’ll pretend this never happened, but you need to leave now.”

Looked as though logic wouldn’t work on this guy. She mentally measured the distance from her to the gun and wondered if she could get there before he put his hands down. “You mean won’t.”

“I need you to stop worrying.”

That voice, all soothing and calm. It called to her, but she refused to trust it. Not when it promised a one-way ticket to getting injured…or worse. “That’s not going to happen with you standing in the middle of my house.” 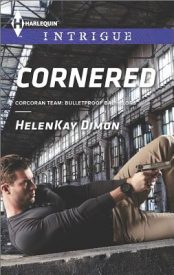