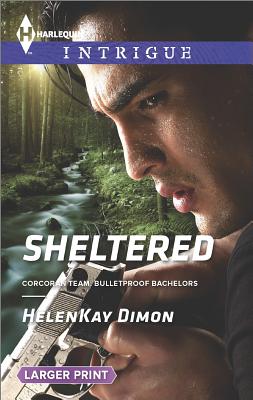 She’d always preferred handling things on her own. Until a sexy undercover agent stepped in to protect her.

Strong and silent Holt Kingston has one mission: to infiltrate a dangerous cult with more firepower than faith. But when the compound’s ruthless leader has a gorgeous former member in his sights, single-minded Holt won’t rest until the mesmerizing Lindsey Pike is safe.

After living undercover for years helping others flee, Lindsey isn’t used to someone else calling the shots. Not even someone as capable and captivating as Holt. But now someone knows she’s back—and wants her captured. Maybe even killed. As the cult slowly closes in on them, Lindsey can no longer hide how much Holt’s protection soothes her peace of mind. And heals her wounded heart.

is Book 2 in the Corcoran Team: Bulletproof Bachelors 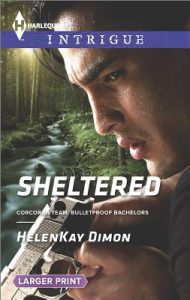 She wandered down the hallway in search of the perfect mindless magazine before she stilled. Something was off. In the air, in the tight space…something.Up on the balls of her feet, she spun around, thinking to head back to the bedroom and to the gun she kept locked in a safe in her nightstand. Then it hit her. No banging. The wind still howled and the rafters shook now and then. But no more noise.

Torn between possibilities, she stood there. The poor shutter probably finally blew off. That meant hunting it down tomorrow and reattaching it, properly this time. Even as the rationale hung in her mind her unease increased. The slow churning of dread deep in her stomach spun faster. Yeah, she’d lived through paralyzing anxiety before and knew the sensation never led her wrong.

She turned back toward the family room and saw him. It…whatever. Big and looming and shadowed. Without thinking, she took off in a sprint in the opposite direction. Her feet tapped against the floor as she broke for the bedroom. For the gun and the phone. She’d use the lamp as a weapon if she had to. Anything to survive.

Footsteps thundered behind her, louder and faster. Just as she hit the doorway a hand fell on her shoulder. Fingers clenched against her pajama top and dragged it and her backward. She landed with a thump against a solid mass.

“Listen to me.” The deep voice vibrated as he whispered.

She wound up for the most deafening scream of her life, but it choked off in her throat when his hand landed on her mouth. “Lindsey, stop.”

In the haze she didn’t recognize the voice. Didn’t matter if she did. Forget that he knew her name. This person broke in. She had to get him out or take him down. Those were the only two options. She would not be a victim again.

“Lindsey, it’s me.” He pulled her in tighter against him, banding an arm around her middle and trapping her legs with one of his.

“Get out,” she screamed, but the words got muffled against his palm.

She went with biting. Clamped down hard on the fleshy part of his hand and heard him swear as he jerked back. His arm loosened and she scrambled away. She couldn’t get the bedroom door shut, but she could get to that lockbox.

Her heartbeat hammered in her ears as her fingers fumbled with the drawer pull. She’d barely opened it when the attacker knocked her back on the mattress. She flailed, kicking out, trying to land a punch or a hit, or anything that would slow him down or double him over.

Adrenaline pumped through her. Between the race down the hall and the fear pulling at her, she should be exhausted. Instead, energy pulsed through her. She believed she could lift the house, if needed. But first she had to move this guy.

She shoved a knee deep between his legs, but he reached down and caught the shot just in time. With her head shifting on the bed and her body in constant motion, she could barely see. All of her focus went into thinking and moving.

His frustration hit her. The words took another second. She maintained her tight grip on his wrist as she looked up. Her gaze went to the broad shoulders and coal-black hair. Those intense dark eyes.

Recognition struck. Right, Hank…something. He was the new handyman, the gofer, whatever his real title, for the New Foundations Retreat. The place she hated most but could not escape.

If he thought letting her make that connection in her mind would make it easier to accept his presence, he was dead wrong. She put anyone affiliated with New Foundations in the “never trust” category. The scruffy rough-and-tumble look would not get him off that list, especially now.

She bucked her hips, trying to knock him off balance. “Get off.”

When that failed, panic rolled through her. His weight anchored her to the bed, which left her few options.

“You need to listen,” he said in a harsh whisper.

“No.” She tried to wiggle her wrist free so she could scratch. If he’d put just a bit of space between their locked bodies, she would knee him hard enough to send him rolling on the floor.

Lightning lit up the room and a crack of thunder came right behind. She remembered childhood tales about the time between them having something to do with the distance you were from the storm. Probably hogwash, but she needed something mindless to block the blinding fear.

He touched her check and moved her head until she faced him. He stared down, as if willing her to believe. “Men are coming.” 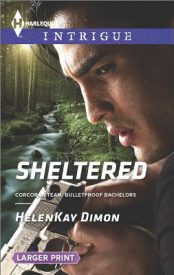 No slow opening here, as Dimon leads off with an exciting, steamy bang.