Book 1 in the Sleeping with the Boss Series 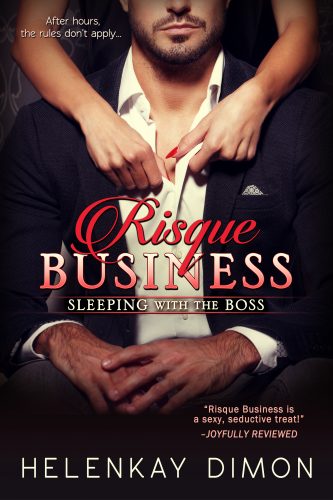 After Hours, the rules don’t apply…

Kari Reynolds’ short-term assignment at Coleman Engineering just got interesting. It’s her job to lead workshops and set down the rules, but there’s one big problem – the boss, Matt Bradford.

Being near Mr. Tall, Dark and Smoking Hot brings out Kari’s naughty side. One look at him makes her forget what’s appropriate in the workplace, and she’s smart enough to know the heated glances he’s shooting her way have nothing to do with business. Now all she has to do is convince Matt to ignore her job title and try a little office pleasure…

Book 1 in the Sleeping with the Boss Series

is Book 1 in the Sleeping with the Boss Series 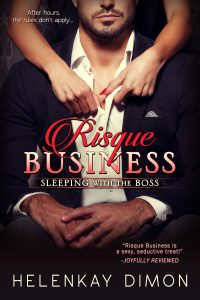 Explore the
Sleeping with the Boss Series
→

Matt Bradford stared across the conference room table and felt his balls clench. His managers stepped out for the lunch break twenty minutes ago, but the glass-walled space was not totally empty. One person remained. One hot and very off-limitsperson who broke his concentration just by breathing – Kari Reynolds.

With straight brown hair, green eyes and body that even her proper navy business suit couldn’t hide, she qualified as pure temptation. Curvy with big eyes and a full mouth. Then there was the necklace. She wore a string of pearls every single day, and every single night he fantasized about her spread out on his sheets wearing nothing else.

“You don’t have to babysit me, you know.” She delivered the comment without looking up. Her fingernails drummed against the mahogany tabletop as her gaze stayed focused on the yellow legal pad in front of her.

“I’m not hungry.” Now that was a damn lie, but food was not the issue. She was.

She’d come to Coleman Engineering on an interim assignment and at the insistence of corporate headquarters. Matt ran the San Diego satellite office but the owner in New York City, Rob Coleman, set the rules. When a manager there crossed a line with an assistant a few months back, Coleman instituted a company-wide human resources campaign on proper workplace behavior. Matt’s division claimed a clean record, but that didn’t matter. Everyone had to attend the training by the outside consulting group, which landed Kari and her mile-long legs right in his path.

Matt had never even dated a woman from the office. He hadn’t wanted to take the chance of having his advances misunderstood. But keeping his hands off Kari and his staring to a minimum was killing him. It was as if Rob had invented this twisted sensual game to torture him.

“I leave on Friday,” she said.

That was news to Matt. That left only a few more days of watching her and wanting. “Since when?”

She glanced up at him. “I thought you’d be relieved to be rid of me after three weeks of constant contact.”

“Admittedly, before you came I wasn’t looking forward to interrupting the workday for lectures on topics that seemed like common sense, but you made it interesting.” He left out the part where he spent half the night mentally undressing her.

As if she could read his mind, she smiled. Leaning back in her chair with her arms folded under her breasts, she crossed one leg over the other. “In other words, you got used to me.”

That heated look, the dip of her blouse, the peek of the shadowed valley beneath the open button, the sexy way her leg swung around in the air. In any other place, in any other time, he would swear she was sending a signal.

Risque Business is a sexy, seductive treat! This novella is packed with steamy scenes and a hot couple that is irresistible.

Don’t let the shortness of this story fool you…it’s definitely worth reading …it can be your quickie and satisfying lunch break read anytime!