Book 2 in the Sleeping with the Boss Series 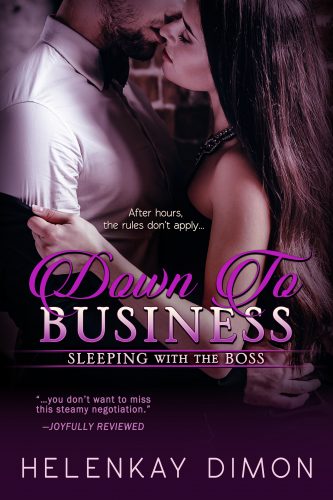 After Hours, the rules don’t apply…

Millionaire businessman Rob Coleman has more than work on his mind. The glassed-in atrium of his office building provides the perfect view of the sexy woman in the office across from his. The same woman who likes to wear short skirts, and Rob has a certain weakness for pretty women in short skirts.

When a chance run-in at the lobby coffee cart leads to much more intimate meetings, Rob realizes he’s lost control and is thinking about Ella Lachlan all the time. For a man who doesn’t mix business with pleasure, figuring out his fantasy woman is also his ex-wife’s new assistant means one thing – trouble.

Book 2 in the Sleeping with the Boss Series

is Book 2 in the Sleeping with the Boss Series 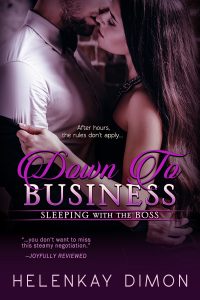 Explore the
Sleeping with the Boss Series →

Ella Lachlan didn’t have to glance behind her at the coffee cart to know who stood there. The subtle hint of cloves hit her first. Something about his scent reminded her of spiced cider. Even in the dragging humidity of the New York City August afternoon, the smell made her think of a warm fire and holidays growing up back in Pennsylvania.

The deep sound of a male clearing his throat confirmed what she already knew. After all, he stood close enough for her body to recognize his. Her breathing would echo through her and thunder in her ears, lingering for hours as she tried to shake his memory.

She’d made a coffee run to the cart in her office building’s lobby every workday at two-thirty for the two weeks. He’d shown up for the last four days. He never spoke. Never acknowledged her except with a slight nod of his head. But no matter where she was in line, he’d somehow end up behind her, standing close enough to send every cell into a wild dancing frenzy inside her. Just inches away until the heat of his body seeped through his suit and her short skirt, straight into her skin.

The unrelenting attention didn’t scare her. She knew this was about attraction and not a threat. Call it instinct, something innate and primal.

He was careful not to touch her, even as every inch of her, every part of her mind and body, craved it. But he watched. She’d catch his heated gaze traveling down her legs as she picked up her order and walked away. See him peek over the rim of his cup or sneak a quick look as he pushed the buttons on his phone. He pretended indifference on the outside even as an unseen energy arced and crackled between them.

He wasn’t the only one hiding a wandering eye. She drank in the sight of him through a series of brief glances. Hair so dark it teetered on the edge between brown and black. Eyes the color of a leafy green field and shoulders that filled out his fitted dark suits and highlighted his trim waist. If she were designing the look of her perfect male ideal – tall, brooding, commanding, and dripping with confidence – she’d use his photo.

He lacked the pretty-boy handsomeness of most men her age. The early twenties seemed to come with a prep school smoothness that never appealed to her. This guy was different. Older with more character. All rough edges with a firm jaw licked by dark stubble and hair a bit too long for the usual business executive.

She knew without asking that’s what he was. Power oozed off of him. He skipped the obvious clichés of wealth, opting for a black band watch rather than the usual gold one and refraining from boring everyone around him with overblown and overly loud one-sided phone conversations like the I’m-so-important crowd tended to do.

Nothing about him struck her as contrived. He didn’t need to pretend. He existed in his world and ruled it with a quiet but iron authority.

The office building housed all sorts of financial businesses and legal offices. The Central Park South address with the marble floors and soaring glassed-in atrium running through the middle spoke to the money-making capability of everyone who walked through the security station just inside the lobby doors. The unique set-up sacrificed individual office privacy in favor of grand design.

That’s how she’d first spotted him. She had a tiny inside cubicle by her boss’s door. No windows and only half-walls. Across the atrium, this man’s huge office spanned the length of three regular spaces and stretched from the inside atrium courtyard to the towering windows of the outside wall.

She’d worked at Kingman Designs on the fifteenth floor for a little more than a month, keeping her head down and butt in her chair to escape incident until her probationary employment period expired. All those lunches at her desk led to unguarded glimpses of him then outright staring. She’d spun a rich fantasy life to fill the boring afternoons and the quiet darkness of her lonely bedroom each night.

“I’m buying.” His husky tone blew across the back of her neck.

They were the first words he’d ever said to her. Her breath caught in her throat in response. It whooshed out again a second later when he leaned in, his mouth close to her hair as he reached around her to drop a twenty on the counter.

“She’ll have an iced coffee, room for milk. I’ll have the same but black is fine. I prefer mine dark and rough,” he said to the barista, who scurried to fill the order.

The words skated down Ella’s spine. He sounded as good as he looked and the sensual undertone had her shifting her weight to keep from spinning around.

She finally found her voice. “How did you-” 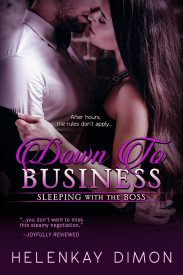 This book was another great addition to Dimon’s backlist.

It’s time to get Down to Business because you don’t want to miss this steamy negotiation.

Down to Business was quite simply an enjoyable [read].