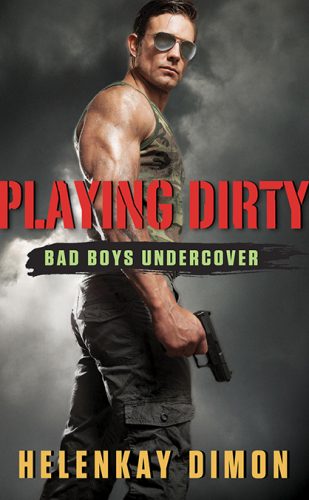 As an elite Alliance agent—the joint undercover operation of MI6, the British Secret Intelligence Service, and the CIA—Ford Decker lives for the adrenaline. But when he befriends sexy property manager Shay Alexander in hopes of finding her cousin, a known national security threat, Ford crosses the line, getting to know her better . . . in bed.After being burned by her last relationship, Shay wants to take things slow. Yet she can’t keep her hands off the drop-dead gorgeous hottie who’s moved into her apartment building. So when Ford’s identity as an undercover agent is exposed, his betrayal cuts deep. Shay never wants to see him again, but Ford can’t let her go, not when her life is still in danger. He will sacrifice everything to protect her, then be prepared to walk away from the only woman he’s ever loved, even if it breaks him.

is Book 1 in the Bad Boys Undercover Series 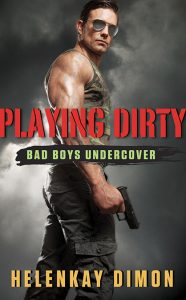 “Are you looking for pity?” She slipped her hand into his hair, as she always did. Something about the length, as if he were growing out a military cut, appealed to her as she wove the softness through her fingers.His eyebrow lifted. “If that would work.”“You’re getting there.”

She’d been so sure he was former Army—or something—and asked him about it the first week.

Nothing in his renter’s agreement talked about military service, but she got the vibe. Service members moved in and out of DC all the time. She got the routine, and recognized the straight stance and assured conversation. And he had the confident walk and toned body down.

He’d listened to her assessment and laughed it off, insisting his smartass ways would have gotten him kicked out on the first day. She pretty much agreed with that.

“I’m willing to do almost anything to lure you into bed,” he said in a heated voice.

“Interesting.” And more than a little tempting. After all, he was an expert with that tongue, and not just for talking.

He pulled her in closer, wrapping her in his arms and pressing his chest against hers. “Next time we’ll have to schedule in some phone-sex time while I’m gone. Imagine me ordering you to touch yourself. Pretty damn hot.”

Her heart did a little jig at the thought. Saying “next time” meant whatever they had wasn’t going away. For now, knowing that but little else was enough. Soon she’d need more. “You gotta tone down this sweet-talking or
it will go to my head.”

Before she could laugh, he lowered his head and treated her to a welcome home kiss that had her wanting to tie him in a chair to keep from leaving again. Hot and firm, he took control and dragged her under. His hands rubbed up and down her back as his mouth crossed over hers. When that sweet tongue slipped inside and met with hers, she dug her fingernails into his shirt. Almost bit through the cotton to hit skin.

He pulled back just far enough to stare down at her. The room spun and she held onto his shoulders to keep from falling down as babble filled her brain.

“I can spit-shine my lines until they’re clever but we both know you’re the gatekeeper.”

She wasn’t exactly sure what he was talking about but she liked the sound of it. “Damn right.”

“And I am your sex slave.” His voice dipped low until it skidded across her senses.

She clenched her fingers even tighter against his shoulders. Had to clear her throat a few times before finally spitting out a word. “Nice.”

Those strong hands slipped down her back to land on her ass. “The green
light is totally in your control.”

His touch had her stretching up on the tips of her toes to brush her lower body against his. Not her most subtle move but then nothing about them being together was. They’d shifted from simmering to raging heat from the beginning. Skipped right over the get-to-know-you phase on the way to the bedroom.

She knew about his job and tried to keep a handle on his erratic schedule. His renter’s application included his social security number, which led to his impressive credit score and the glowing report from his last landlord in Virginia. The rest remained a mystery . . . except for the information she found in a few hundred Internet searches trying to make sure he wasn’t a wanted serial killer. Or married.

A woman had to be smart about these things. She refused to feel guilty about the dating recon after hearing one horror story too many from her friends. A guy with a hidden wife and an anger complex here. A guy who liked to wear women’s bikini underwear over there. Then there were the looking-for-money types. Yeah, no thank you.

Playing coy wasn’t her thing, and the attraction between them sparked on the initial walk through the condo had burst into full flame by the time she handed over the keys. He’d asked her out a few weeks later. She refused. Two days later he brought pizza over and they’d been seeing each other ever since.

Seeing as in sex. Lots of sex. The guy might work with computers but he knew his way around a woman’s body. Hands, tongue, mouth . . . lord.
After a rocky last relationship, the physical play with him and limited dating contact due to his work schedule appealed to her. It didn’t matter that the need to know more about him kept picking at her. She’d vowed to turn off her preference for being prepared for anything and just let things unfold without trying to steer them.

In that spirit: “I thought you were blowing out my pipes.”

He chucked in the middle of nibbling on her ear. The sound was so rich and deep, so sexy it hit with the force of a superpower. “I would love to do that, yes.”

She felt his arms around her waist with hands caressing her ass and the back of her thighs through her jeans. The dual blast of touching and closeness had her breath stuttering in her chest. She inhaled and caught his scent, the
same hint of black pepper she associated with his soap.

Unable to resist his face and that firm chin, she smoothed her fingertip around his mouth, letting the stubble of hair tickle her skin. “You should be resting from your boring conference and long flight.”

“That is not what I had in mind when I came over here.”

“My pipes, right?” She’d given him a key and the alarm code before he left on his latest trip. He’d been in and out working on the steps to the front door of the building. The argument about needing to get to the supply closet without tracking her down proved compelling. And the idea of him spending his first few hours back in DC fixing the plumbing problem she mentioned on his way out was just about the sexiest damn thing ever.

“Do your pipes need blowing?” He kept a straight face.

She had no idea how. “You make everything sound dirty.”

“Give me ten minutes and I’ll show you how dirty I can be.”

There it was, the flirty talk that drove her doubts away and had her handing over keys even though a little voice inside her head told her to be more careful. But there was no need to fight it. She didn’t plan to make him wait or work for it. Those days were behind them, and they had passed fast.

That left only one thing. “I have two words for you.”

One of his eyebrows lifted. “Which are?”

She leaned in until her mouth hovered over his. “Green light.”

He pulled back as his gaze searched hers. “You sure?”

Since she’d been giving him the go sign pretty much from the beginning and he’d been speeding ahead with her, his hesitation now struck her as odd. But those knowing hands skimming along her sides let her know he was ready when she was.

The answer was now. 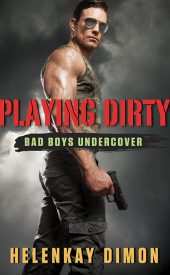