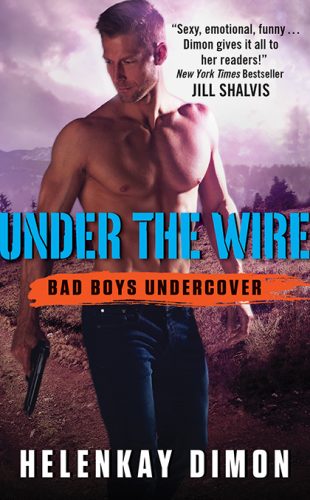 Only one thing could pull Reid Armstrong away from a vacation he’s earned with every muscle in his finely honed body—learning that his former fiancée has disappeared on a top-secret science expedition in the middle of nowhere. Second chances don’t come often in Reid’s business, and he needs to prove his worth to Cara Layne or die trying.

Waking up to find her camp destroyed and her colleagues missing, Cara is a walking target. She can’t trust anyone, least of all Reid. Even if his skills get them out alive, he’s a heartache waiting to strike twice. Yet being in close proximity proves their connection burns hotter than ever.

The body count is rising, the enemy is getting closer, and soon Reid will be right back in the position that cost him everything—forced to choose between the woman he loves, and the job that’s his only hope of saving them both…

is Book 4 in the Bad Boys Undercover Series 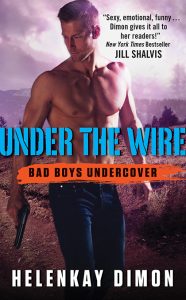 Cara Layne woke on a scream. The noise rumbled to life inside her chest but choked off as her eyes snapped open. Her muscles jerked. Without thinking, she grabbed for the inside stuffing of her narrow down sleeping bag, digging her fingernails deep into the slippery material. Bunching it in closed fists, she pulled the sleeping bag even tighter around her and tried to cocoon her body for protection. From what, she didn’t know.The weather had turned without warning.

The wind built to a sick wail then faded, only to roar back to life again. It echoed around her like a child’s cry as it whipped through the campsite. To block the screeching, she pulled the bag up and against her ears.
She could still see that black night surrounded the tent. The chilling cold signaled early morning, but nowhere near dawn. She tried to focus, to figure out what was happening.

Her tent mate shifted and kicked beside her. A zipper screeched. The material of his bag rustled and he said something she couldn’t quite hear over the crescendo of sounds muffled through her clogged ears. The ground shook and the air almost vibrated.

Nothing made sense. They’d ventured out on an overnight trip to collect samples. The usual work and not dangerous. They’d set down outside of avalanche and flood zones. This was the right season. The right place. Yet, dread hovered all around her. The sleepy haze dragging her down refused to lift. She tried to shake off the clouding in her brain and focus on the clicking sound. A steady tapping.

What the hell was that?

The tent shook as a new blast of air caught the canopy, the material flapping above her head. She pulled her body tighter into a ball. Fear rocketed through her as the nylon that promised to stay sturdy even during the most punishing high mountain expedition ripped around her.

The howling sound finally registered. Not weather. Not animal. Human.

She lifted her head only high enough to see a dark figure pulling at the material above her. At first she thought her tent mate held their failing shelter together with his bare hands . . . then the blade flashed. She screamed, but the sound disappeared into the cacophony of banging and shredding.

The pain came next. Blinding pressure drilled against the sides of her head. She felt as if her skull had compressed. Had started to collapse and shatter. Stray thoughts bombarded her brain. Paranoia drowned out common sense as the top of her tent split open and more cold air poured inside.

She struggled to get to her knees then slipped and fell flat on her stomach again. Her skin flashed from cold to hot. Footsteps thundered around her. The crashing of equipment. Yelling. Still, her head pounded. Not with a headache or migraine. This pushing made her eyes ache as wave after wave of dizziness crashed over her.

Someone or something tugged hard at the seam of her sleeping bag. She grabbed, tried to hold on but her fingers slipped in the slick material. The tugging became dragging as the down slid over rocks and her hip thumped against the unforgiving ground.

She fought to force out a scream but no sound came. The bag trapped her, making it impossible to move more than a few inches. Vulnerability sent her racing headfirst into panic. Her teeth ground together as she struggled to move, to fight back, and despite the screaming in her head, a strange lethargy she couldn’t kick weighed her muscles down. It hurt to lift her arm. Her thigh rolled up underneath her as she was dragged along, crushed against her stomach and stealing her breath.

She couldn’t suffer through one more minute. Losing the physical battle, she looked for mental escape and tucked her head as her mind floated away. Music filled her scattered thoughts. A familiar melody her father used to play. One she struggled to remember whenever she needed comfort. The humming swam through her mind, mixed with the pain.

She heard a crack and felt a hard thwap like a punch to the back of her head. Then the world around her blinked into a tunnel of darkness. 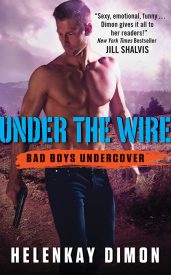 Dimon has deftly combined sizzling romance with covert operations in a sexy thriller that will leave readers searching her backlist and eagerly anticipating future installments.

Dimon brings a heart-pounding mix of sexy romance and nonstop action to an intriguing plot, and the combination of smart storytelling and characters who share red-hot chemistry and believable conflict makes for lively, compelling reading. A sharp, complex, and intense romantic-suspense novel.

Dimon is a master of romantic suspense. While the action is intense, her story also provides characters with deep, meaningful relationships and enough snarky humor to keep everything moving at a quick clip.

UNDER THE WIRE is a well paced, well written story of suspense. The premise is entertaining and intriguing; the characters are charismatic, colorful and engaging; the romance is a second chance at love for two people caught up in a world of espionage and danger.

— I Heart YA Books