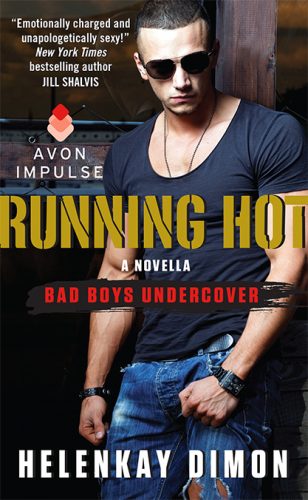 Camped out at a resort bar in Fiji, CIA operative Ward Bennett may look like he’s on vacation but he’s really deep undercover, hunting a dictator on the run. Ward may be on the job, but that doesn’t mean there isn’t time for the sexy female bartender. That is, until she drugs him.

When Tasha Gregory discovers the hottie on the barstool isn’t who he pretends to be, her MI6 training kicks into gear, and she has no choice but to take him out. Problem is, Ward’s not an easy man to put down for long. More than once, his interference almost blows her surveillance operation—and her ability to keep her heart to herself.

As the situation heats up, these two must decide whether they can trust one another—and quick. Working together might just make everyone safer, but getting close enough for comfort … might just get them killed.

is Book .5 in the Bad Boys Undercover Series 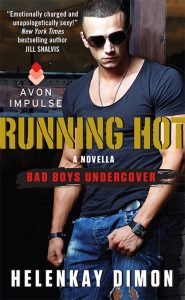 Ward Bennett jerked back into consciousness. One shift and he nearly wrenched his shoulder out of its socket. He didn’t need to see the plastic zip tie to know that’s what dug into his wrists and bound them behind his back.Moving his ankle, he didn’t meet any resistance. The person who shackled him made a pretty big miscalculation. As if he needed his hands to escape. Any idiot could break a zip tie. But first he had to figure out how he got in this position and why.That must have been one hell of a date. It was a fucking shame he couldn’t remember one minute of it.

Humidity made his skin slick and sweat gathered between his shoulder blades as he scanned the open area. He’d been in similar structures for a week now but didn’t recognize this particular one. He’d call it a bungalow or cabana of sorts. The locals referred to it as a bure. Wooden beams, a thatched straw ceiling soaring a good twenty feet above his head, open walls, and not a stick of furniture other than the chair he was tied to.

A warm breeze blew over him and darkness fell around him on all sides. He could make out the shadow of trees and smell the ocean in the distance. He strained to listen for the usual sounds of the resort – the mumble of conversation and ever-present local music piped through the speakers, maybe the sound of motorboats in the distance – but heard nothing.

People described this place as paradise. Right now, to him, Fiji pretty much sucked.

As soon as the thought registered, footsteps echoed around him. The gentle sway of hips came into view. His gaze traveled up the tanned, lean legs peeking out from under the navy cargo shorts. Then to the sliver of bare stomach visible at the bottom of slim tank top and to the impressive breasts filling out the top of it. He finally landed on that face.

Tasha Gregory, the damn-she’s-hot, smooth-talking bartender from the Waitui Resort. The same one with the husky voice that made him stupid. From the slight wave in her long blond hair to the big brown eyes, everything about her worked for him. Which was how they ended up at her place last night…but the rest between then and now was a blur.

The “how” was simple enough to understand. The zipping attraction had led to flirting. That explained why he spent most of the last six nights parked on a stool across from her, trading bits of island gossip. Well, that and because he was on Maku, a private island in the pacific nation of Fiji, to gather intel. She just happened to be a smokin’ hot source of intel.

Which led to a new issue. For a supposed resort bartender she sure knew her way around a zip tie. And he was not an easy man to get the jump on. He’d been trained by the best at The Farm, the CIA’s top-secret training facility near Williamsburg, Virginia. There he’d learned how to do everything from survive interrogation to fly a helicopter to cut a man’s head off, sometimes all at the same time.

A hundred-twenty pound hottie shouldn’t worry him but he’d lived long enough to appreciate the power of a pissed-off female. And he seemed to have ticked this one off in a big way. Normally not a problem, but he had a job to do and being tied to a chair made that tough.

He twisted his hands, trying to keep the rest of his arms still and not give away his movements as he inched his thumb closer to his back jeans pocket. “Uh, Tasha?”

He still wasn’t clear on when and how he’d gone to sleep. “You don’t seem too happy about that.”

“Not really.” She didn’t bother to look up as she shuffled her way through his wallet, picking out one item at a time, checking it then letting each drop to the floor by her feet.

Again, not exactly the usual bartender MO. Of course, every item on the floor could pass for real but wasn’t. His cover depended on that level of craftsmanship.

He cleared his throat. “This is not the way I generally end a date. Start one, sure, but not end.”

“Shut up.” She exhaled as she dumped the rest of the wallet on the floor and slipped a phone out of her back pocket.

“Now, that phrase I’ve heard on dates.” His eyes narrowed as he realized the cell she held looked an awful lot like his burner. “Care to tell me what we’re doing?”

She finally glanced up, firing a load of you’re-a-dead-man fury in his direction. “Who are you?”

There was a question he couldn’t answer. The CIA tended to frown on black ops agents spilling their biographical data. She could pull out a flamethrower and put it to his dick and he’d still duck this one. And he was starting to worry she had a lethal weapon of some sort on her.

“I thought we dealt with that days ago. I came to the bar. You served me drinks. We’ve been flirting and then we graduated to touching.” Sweet Jesus, the touching. She had smooth skin and this body that was so fit and curvy it made his fucking eyes cross. “Any of this sound familiar?”

“We’re done playing games.” That’s all she said. Dropped the comment and then nothing.

She stood eight feet away, outside of kicking distance, and didn’t move. No telltale signs of nerves. She didn’t shift her weight or her gaze. She looked at him as if she could kick his ass and was just seconds away from starting. For some reason Ward found that sexy as hell.

The fact she’d dropped her usual smile and now came off as trained and not some random bartender was not quite as sexy. A grifter maybe? A hot woman who conned men out of their vacation money. Possible.

Thinking she might have a partner, Ward glanced to the side. The kick of pain had him blinking and swearing. “My head is killing me. What the hell kind of sex did we have?”

Well, that was a damn shame. “Is that why you tied me up? Because I’m totally capable. I assure you. We can go right now.”

“You talk too much.”

He’d been accused of a lot of shit on this job. Being chatty was not one. “You’re not exactly coughing up information here.”

“You were more fun as a bartender.” Her arm shot out so fast he almost didn’t twist away in time. Not that he could get too far while stuck in the chair anyway. At the last minute he threw his head to the side and took the brunt of the smack from the heel of her hand on his collarbone instead of his chin. “Damn woman that hurt.”

“It was supposed to.”