Book 4 in the Hanover Brothers Series 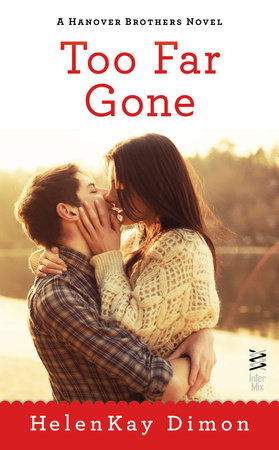 The Hanover brothers inherited quite a legacy from their con-artist father, including a secret they never imagined…

FBI Agent Walker Reeves came to Sweetwater, Oregon looking to settle a vendetta. His career is in shambles after years spent tracking down the Hanover brothers. He hopes to tie them to the schemes of their father Charlie—the same man who ruined Walker’s life. Unfortunately, Walker’s desire for revenge blinds him to the one chance at happiness he’ll ever get…

Even knowing that her friends would worry, art store-owner Mallory Able took a risk sleeping with Walker. She succumbed to his craving for control in the bedroom, but when reality got too tough for Walker, he bolted and left her in ruins. Now he’s returned. If Walker wants her back, he’s going to have to do some smooth talking both in and out the bedroom. And this time Mallory is in charge…

Book 4 in the Hanover Brothers Series

is Book 4 in the Hanover Brothers Series 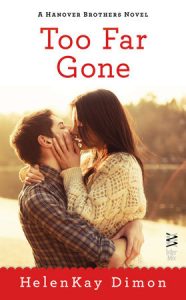 Mallory Able stood at the cash register and looked out the front windows of her shop to the main street beyond. An hour passed and still she waited…and waited. Customers came in and out all day but she stood watch for one in particular. Not even a customer, really. The guy who slept with her, made her believe then slinked away before the sheets cooled.

Walker Reeves, all buttoned up and proper in his dark business suits. All hot and naughty underneath.

If rumor was right he’d walked back into town the night before. Not that he called her or anything. But she’d been engaged in a mental countdown to their inevitable meeting ever since. The plan was simple: spot him then punch him. Some of the gnawing in her gut subsided whenever she visualized following through on that.

But so far the only people in the store belonged there. Female customers sat around the long table that ran the length of the open middle area of Gossamer, her arts and crafts. Thanks to the scrapbooking class, supplies covered every inch of the scarred wood top. The chatter rose and fell along with the laughter and exchange of gossip. The women passed a coffee pot around and told stories. Others mingled in the book aisles.

On any other day Mallory would have loved the activity, sat back and enjoyed the warmth and welcoming atmosphere she’d created. After a lifetime of living on the fringes and feeling left out, Gossamer gave her a purpose. A home.

Thinking about Walker gave her a headache. Conjuring up the memories of those months together caused a few others parts of her to hurt too. She refused to let that pain swamp her.

He wanted out of whatever they had together, fine. But he should have walked out like a man, telling her it was over and saving her some dignity. Instead, he went with hiding and failing to returned her calls for a month. The jackass.

The chimes at the top of the door signaled a newcomer. Mallory held her breath as her gaze zipped to the entrance. Maybe he’d finally crawled back…but no.

A breeze ushered in Grace Pruitt, Mallory’s newest friend and one of Sweetwater, Oregon’s most recent residents. And a constant reminder of Walker. They once worked together and shared a bond. After he left town so abruptly, Grace had stood up for Walker and apologized for his behavior. But as the days passed without a word even she stopped trying to defend him. Which was good because Mallory’s patience for hearing about what a good guy he was had run out on about day three after his departure.

The bright sunshine warmed the cool nip of the late fall wind and put a rosy glow on Grace’s cheeks. So did nearly five months of pregnancy.

Mallory was half surprised Grace wandered in alone. These days Callen Hanover, the baby’s father, stuck close. The over-protective thing wasn’t new for the guy but even Mallory, who shared a difficult history with Callen, had to admit seeing him all twisted up and rushing around to watch over Grace at every turn was kind of cute.

So was the thing where he proposed to Grace and she told him “not yet.” Mallory loved that part. Sure, Callen had lived through a lot of crap thanks to Charlie Hanover, his con man father, but the guy tended to get all bossy. Seeing him brought to his knees by Grace…well, that was just about the only thing that made Mallory smile these days.

Grace stripped off her scarf as she walked. Her long auburn hair bounced around her shoulders and her skin shined all pink and healthy, likely from a severe case of happiness. She was tall and beautiful. Except for an adorable belly bulge that looked like she swallowed a basketball, she looked long and lean. Enough to turn more than one male head n Sweetwater. Something else Mallory found amusing since Callen did not.

The thin jacket stayed on and Grace rubbed her hands together as if it were ten degrees outside. Probably had more to do with the fact she wore a skirt and cowboy boots than the fifty-degree temps.

“Half of Sweetwater is in here.” Grace smiled as she dumped her bag on the counter and rested her palms on either side of it.

“The female half.” Moving here after college had been a risk but it paid off. Mallory owned a business and slowly, month by month, year after year, more people in town and the surrounding county viewed Gossamer as a comfortable place to gather. Finally, Mallory fit somewhere.

Grace waved to two older woman sitting at the end of the long table. The same two women who spent most of their afternoons hanging out in Gossamer, listening to conversations and buying something here and there.

“I don’t know a lot of men around here who like to scrapbook,” she said.

“But they are as good at gossiping as any woman I know.” As far as Mallory could tell that affliction was going around. “Which is why you’re here, I’m guessing.”

“I’m here because Callen turned in time to see my boot slip on the bottom step at the house this morning and threatened to carry me everywhere for the next four months.” Grace shook her head as she pointed to the tea collection on the coffee and snack counter behind Mallory. “The man is going to coddle me to death.”

If any man could do it, it would be Callen Hanover. Mallory would put money on that.

She grabbed the canister of loose peach tea, Grace’s favorite, and put it all together. Filled the French press and let it steep before pressing the plunger down. “He’s an interesting mix of bossy and caring.”

Grace rolled her eyes as she sat on the stool on the opposite side of the counter. “He’s lost his mind.”

Love did that to a man, or so Mallory heard. “That, too.”

Tall, handsome, devoted, and up until a month ago as broken a man as Mallory had ever seen. Callen spent most of his childhood being dragged around by his idiot father, separated from the woman he thought was his mother and from his brothers, Declan and Beck. The life put a chip on his shoulder that they’d all been taking shots at ever since Callen landed in Sweetwater to claim the falling down mansion of a house he and his brothers inherited from their paternal grandmother.

Now that Mallory knew Callen’s big secret, that he and Walker were also brothers, that they shared the same birth parents even though they never shared a life or knew about each other growing up, the pieces fell together in Mallory’s head. Everything made sense even though she had to hear the news from third parties since Callen hadn’t known and Walker never bothered to tell her.

Yeah, no doubt about it. Callen and Walker were two controlling and mysterious peas in a dysfunctional pod.

Lucky her for getting messed up with this family. That would teach her to get reeled in by dark hair, dark brown eyes and a dark brooding personality.

Walker Reeves…just thinking about him made her hands curl into fists.

Rather than come out hitting, Mallory poured Grace’s tea and pushed the mug in front of her. Grace sat quietly and stared. Wore one of those knowing smiles that had Mallory bracing for battle. She sensed the next few minutes could get tense and frustrating.

Grace stirred her tea. Made a big show of banging the spoon on the side of her mug after adding a little honey. “While we’re talking about Walker-”

“I know. Leah told me.” Leah Baron, Mallory’s best friend since college and the sole reason Mallory had gotten tied up with the Hanover clan and, by extension, Walker. She wondered if it would be easier to move than try to separate from the odd family dynamic happening at Shadow Hill, the Hanovers’ inherited house.

She also made a mental note never to get mixed up with a family that owned a house with a name. Because, really, who named a house? That would be like her calling the mobile home she once lived in Stella. Just plain weird. 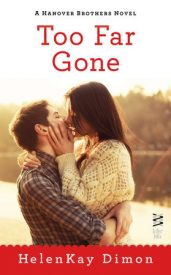 HelenKay Dimon does a fantastic job pulling the reader into a storyline about family, love, trust and betrayal.