Book 1 in the Hanover Brothers Series 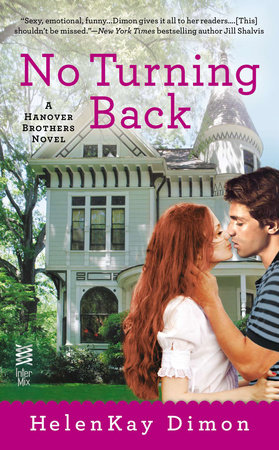 The Hanover brothers inherited some bad behavior from their con artist father. Now three strong women will make honest men out of them.

After ten years in the Army and four overseas deployments, Declan Hanover is ready for life away from a military base. Sweetwater, Oregon, a sleepy coastal town, seems like the perfect place to start over. His plan is to work out a deal with his brothers and the bank to let him keep the estate they’ve inherited, Shadow Hill. But he wasn’t prepared for Leah Baron, whose family lost everything to his father’s cons—including the house Declan intends to make his own…

Leah thinks Declan is just like his conman father. He possesses a bad boy charm that makes her heart pound, but that doesn’t mean she can trust him. All she wants is to get close to him so she can get her house back. But Declan has other ideas. He doesn’t mind being in close proximity to Leah—as long as it’s in the bedroom…

Book 1 in the Hanover Brothers Series

is Book 1 in the Hanover Brothers Series 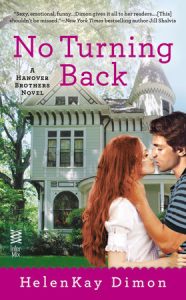 Declan Hanover stood on the porch of the stone house, all three crumbling stories of it, and wondered what he’d ever done to piss off the universe. Four months ago he stepped out of the Army uniform that had defined him for ten years. Now he was unemployed and stuck with a one-third ownership interest in a property in Sweetwater, Oregon. The same property with a mortgage hovering on the brink of foreclosure.

Sucked to be him.

Not that the property was a total write-off. Someone generations ago had named it Shadow Hill, which fit a building framed by fireplaces at each end with a turret in the middle. He didn’t know the exact definition of a manor, but he guessed one would look a lot like this place with its acres of rolling hills and open spaces.

The field behind the main house could work as a pasture if someone cleared out the dead tree limbs and piles of forgotten dirt and old wood. Towering pines lined the long drive from the road to the house, surrounding it on two sides, and the pacific coast sat close enough for a hint of salt to float in the air.

Yeah, the place could be something. It would take piles of cash he didn’t have and months of intense work to make it happen. Daunting but not impossible. Certainly less dangerous than dodging roadside bombs outside Baghdad, and he’d survived four tours of that.

No matter what, making the house livable would probably be less trouble than the woman trying to sneak up on him. He’d heard the crunch of gravel under tires a minute ago, though she parked far down the drive. Even now he sensed her closing in. Smelled the same coconut scent he caught in her hair when he leaned in close to her at the diner.

“Do you live here now?” She asked the question without any warning. Just like that her voice cut through the sunny afternoon.

He turned around, following the now familiar husky female voice to the redhead standing a few feet behind him with her hands on her hips. She had huge gray eyes and wore a strangely sexy don’t-mess-with-me scowl. Add to that the slim dark jeans and a yellow shirt held on her tan shoulders only by thin straps and things were looking up. Well, except for the part where she made it clear she thought he was a scum-sucking criminal.

Never mind the trespassing, which she was, his biggest issue came from her attitude. She looked at his father’s history and put them in the same category. He’d spent his entire life outrunning his father’s shitty reputation. Having people judge him on his genes wasn’t new, but that didn’t mean it pissed Declan off any less.

“You’re the lady from the diner.”

“Yes,” That was it. No other information. Just a terse word and a glare.

Not exactly the best town welcoming committee. “Do you have a name, Ms. Woman Who Hates Me For No Reason?”

Okay, maybe she did have a reason. The Baron name figured prominently in Charlie Hanover history, and not in a good way. “Did you follow me home, Leah?”

She cocked her head to the side, letting her hair fall over her shoulder. The sunlight streamed through the wavy strands.

Not that he noticed. He was working damn hard not to notice the pretty round face or the long legs. Guessing what her body looked like under that tiny top was an off-limits topic as well.

“You left the diner over an hour ago,” she said as she crossed her arms over her stomach.

That sounded a bit stalkerish for his liking but he decided to hear her out instead of throw her out. For now. “Is that a no?”

“I figured you’d end up here eventually. I parked down the street and waited.”

Yeah, no doubt about it. He’d been in town for exactly one day and acquired a stalker. Wasn’t that just fucking fantastic.
He’d wait to be flattered by the attention,
though he doubted there was anything positive about it and stay on guard until he figured out her danger level. Right now he guessed she fell into the furious-Charlie-victim category, which was an ever-growing group. But Declan had seen some terrible things during his time in the military and after. He knew how quickly people could turn, and he had no intention of being in her line of fire if she did.

“Let me guess. You came here because, as you pointed out to your friend earlier, I own the place.” He played along, waiting to see what she would do and say. Being alone with her on a twenty acre property and without a weapon inside ten feet made him more cautious than usual. “I feel as if we’ve already met, what with you knowing so much about me or thinking you do.”

“You shouldn’t have listened in on that private conversation at lunch.”

She had to be kidding. When she just stood there, staring at him with those full lips stretched into a flat line, he got the point. Not kidding.

“So, you’re saying it was my fault you were talking shit about me?” he asked.

She dropped her arms and glanced around, her gaze brushing over the land with a softness that wasn’t there a second ago. “Are you moving in?”

He figured that was as close as he was going to get to an answer. “Possibly.”

Her anger snapped back into place, pulling her body straight and narrowing her eyes. “You’re not sure?”

Enough nonsense. He shifted his weight back on his heels and spared her a we’re-done-here scowl. “I don’t know yet.”

“You’re a big boy, Declan. You should have a real answer.”

The damn woman didn’t back down one inch. The same look had sent two-hundred-pound-plus sergeants running but the louder he got, the bolder she acted.

“And my answer would be your business because…?”

As far as he was concerned, he already was. 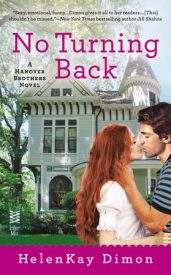 By turns funny and romantic, the sexual tension between the main characters is portrayed perfectly.

Small town romance, great secondary characters, a fantastic blend of humor and drama, and the strong friendship between Leah and her BFF made this my favorite contemporary romance so far this year.

I was completely sucked into the book from the very beginning. The characters were well written and made you feel a part of their lives. It had all the elements of a good romance book. It had drama, love, hate and most of all a happily ever after ending.

HelenKay Dimon knows how to write really, really good stories and this novel is no exception.

The chemistry between Declan and Leah is electric…

If you enjoy a well written story filled with a gossipy town, a trio of scorned but sexy brothers, and a heroine who does some honest to goodness growing up – you’ve found your next read!

A fantastic compelling start to a series that is obviously going to be filled with twists and turns, surprised and revelations. I can’t wait to get to know more about the Hanover brothers.