Book 5 in the Corcoran Team Series 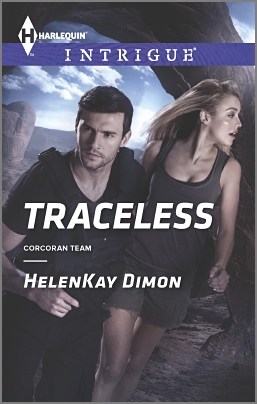 AN UNDERCOVER AGENT WILL TRAVEL TO THE UNFORGIVING UTAH DESERT TO RESCUE HIS WIFE IN HELENKAY DIMON’S LATEST CORCORAN TEAM NOVEL.

Connor Bowen hasn’t seen his wife since she left him seven months ago claiming he was more married to his job than he was to her. Now his past has plunged Jana into mortal danger. This time the former Black Ops agent won’t let anything come between him and the woman he’d lay down his life to protect.

Jana moved across the country to start over far from Connor. But after she’s brutally abducted, she has to once again rely on the Corcoran Team leader for survival. Seeing Connor again reawakens old feelings, and she considers taking him back—but will she even get the chance?

Book 5 in the Corcoran Team Series

is Book 5 in the Corcoran Team Series 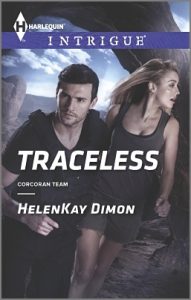 Jana Bowen looked at the numbers again. The black ink blurred and she rubbed her eyes to bring the columns back into focus. When that failed she leaned back in her metal desk chair and ignored the groan of the rusted back legs.

The charity didn’t have a lot of money and prided itself on using a low percentage of the donations for administrative costs. Still, if her butt inched closer to the floor her back ache would become permanent. She vowed to head out tomorrow and find a new chair somewhere in the desert of Southern Utah.

With the scaling red rocks and miles of untouched land, this area of land on the edge of Zion National Park near the border of Arizona possessed a raw beauty. She ventured here, far from the calm of her historic Annapolis home in search of peace.

Hooking up with her former employer, Boundless Global, she spent her days running education programs and arranging for the shipment of vaccines to countries in desperate need of them. Getting lost in the mess in the office files the first day, she now spent her extra hours cleaning up paperwork. The long hours provided a needed distraction from her trainwreck of a marriage and the man she missed more than she ever thought possible.

But right now she had a bigger puzzle on her hands than Connor Bowen. She turned to the charity’s executive director and her friend of many years, Marcel Lampari. “The paperwork isn’t matching up.”

“Still too many boxes?” He stood on the other side of the open main room lined with tables and covered on every surface with boxes and paperwork.

The building they used for their headquarters had been designed as a chapel decades before. Abandoned and far from anything other than brush and rock canyons nearby, the four-room structure was donated to Boundless and quickly restructured to fit desks with computers and the command center for U.S. operations. The vast majority of the staff worked in countries receiving aid. Only Marcel and a few full-time employees worked from here, overseeing donations, a large group of volunteers and distribution chains. With her stepping in, that made four of them in the church office on a regular basis.

She took on the tasks of matching up shipping manifests and doublechecking invoices after her initial review and filing led to inconsistencies. Marcel didn’t have the time and the staff member assigned to the job had relocated to another state, leaving the position in limbo until someone permanent could be hired.

It was mind-numbing monotony that filled the void. Or that was the theory. Since leaving Connor she’d found nothing eased the pain of missing him.

She concentrated on numbers and information contained in boxes on a form in front of her but the math just didn’t work. “I’m up to three mistakes in the Nigeria shipments.”

This couldn’t be a simple math error. After getting an anonymous email from someone in the distribution chain, she’d begun pouring through the files. Every third shipment was off. Exactly the third shipment and by exactly four crates. The paperwork at the receiving end didn’t match the shipping information and the mysterious boxes disappeared as strangely as they had appeared.

“Maybe the trucking company is piggybacking someone else’s shipment on ours then offloading it.” Marcel tucked the pen behind his ear as he always did and flipped through the documents on his clipboard.

She doubted Marcel’s explanation but she went along because it was easier than thinking about a worst case scenario – one where someone was playing with the shipments. “I’d like to think people wouldn’t cheat a charity.”

“Let’s not panic.” He walked over and stood on the opposite side of her small desk. “It could just be that someone can’t add.”

“It’s possible, but over and over?”

He made a face and pretended to count on his fingers. “Numbers are hard.”

Marcel didn’t ruffle. It was one of the things she admired about him. In his late forties, his hair had long ago gone salt and pepper. He was long and lean and the perfect mentor, having spent most of his life in war-torn areas. She admired his dedication and ached for him over the recent loss of his wife of more than twenty years in a horrible car accident.

In his grief, he dove into his work. When Jana’s life fell apart seven months ago from Connor’s mix of smothering protection and workaholic tendencies, she showed up unannounced on Marcel’s doorstep. He let her stay because who could turn down free labor. She guessed he also recognized a fellow damaged person when he saw one.

“Why don’t you get some rest? We can figure this out tomorrow.” He dropped his clipboard on top of the stack of files in front of her. “We’ll call around and get some answers.”

Not the most subtle it’s time to head out signal, so she got the message. “You’re right.”

“Let’s go.” He snapped his fingers. Probably being one of the few men who could do it and get away with it. Had something to do with the French accent from his childhood light in the background and the soft delivery.

“I have to lock everything up.” She turned to the side and tapped the top of the safe. “I’ll head out in a second.”

He frowned at her. “A wind storm is kicking up, so don’t wait too long.”

She glanced at her watch. “Ten more minutes.”

By the time she looked up again, night had fallen and the sky outside the window across from her was dark. The wind rattled the old building and whistled through the beams. She winced as she calculated whether she missed her opportunity to get back to the garage-turned bunkhouse for the workers.

The banging started a second later. A fist pounding and the faint sound of a male voice.

The door slammed open before she made it to the other side of her desk. The song she’d been humming screeched to a halt in her head and a wave of panic washed over her as two men dressed all in black burst inside. The last of her reality jumbled as her gaze slipped from the masks that hid all but their eyes to the guns in their hands.

Glass shattered somewhere behind her. Between the crashing and unexpected sight in front of her, her legs refused to move. The world moved in slow motion and she kept blinking, convinced she’d slipped into a weird nap nightmare.

When one of the men rushed toward her, she forced the air back in her lungs and her brain jumpstarted. She spun around, thinking to get to the emergency door at the back of the building and run screaming for help. Her hip hit the edge of the desk and something crunched under her foot. But she stayed upright. Adrenaline fueled her run as she raced through the maze of desks, ducking and zig-zagging despite the small space. Anything to make it harder for the men to shoot at her with those guns strapped across their chests.

Glancing over her shoulder, she saw them behind her, walking slow and steady now but gaining ground with each long step. Their calm refused to register in her head. Their actions made no sense. Neither did the papers flying around the room and the sudden brush of air over her skin.

As she blew past each table, she grabbed for the boxes and phones and threw anything she could touch on the floor behind her to block the attackers’ path. The thump of packages hitting the floor echoed around her as she folded an arm over her head and plowed forward. The thud of boots on the hardwood grew closer as her breath caught in her throat.

Almost there. She skidded around the long desk near the back of the room and bounced off a file cabinet. Her body was a mass of bumps and bruises but she pushed through, barely feeling anything except the driving need to get to the back door.

She slipped into the small hallway at the back of the main room and plunged into darkness. The light should be on but the usual hum was gone as she felt her way along the wall. Finally, her hands hit the bar running across the middle of the back door and she shoved with all her might.

The whir of the alarm spun around her as the warm air hit her face. Without houses and street lights, the night was lit only by a blanket of stars. In two steps, she walked into the path of the motion sensor and the floodlights clicked on.

Her sneakers slid on the dirt and pebbles beneath her feet. Her chest rose and fell on hard breaths as she looked at the semi-circle of men standing outside the back door. Four of them, all dressed like their friends who were now moving up behind her and pushing her forward without touching her.

Now locked outside and surrounded, she stared at the line of quiet men, including the two pointing guns right at her. One broke away from the group and closed the distance. Terror surged around her and thickened the air. Choking and gasping, she backed up but a hand landed between her shoulder blades and shoved her forward again.

The man glanced to his right. “Kill the alarm.”

“What do you want?” When he faced her again her voice shook as she fought to keep the fear trembling through her from knocking her to the hard ground.

“You.” A single word said in a slight accent. 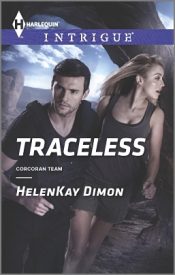 Dimon brings back characters from her delightful series, but she delves deeper into the psyche of Corcoran and its members in this first-rate story rife with action and passion.