Book 3 in the Corcoran Team Series 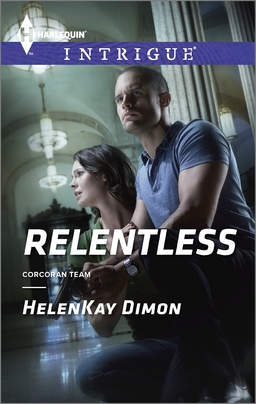 He usually gets what he wants. What he wants is her…and all that comes with her.

Branded a traitor for exposing high-level corruption, former NCIS agent Ben Tanner needs to redeem himself. When the hot new operative saves nurse Jocelyn Raine from a brutal attacker, he embarks on his most challenging mission yet: discovering who’s after the strong, sexy woman–and trying his best not to fall for her. She has, he learns, something in her past she wants to remain hidden.

But when the attacks on Jocelyn continue, Ben takes her on the run to protect her. Sparks ignite and tension is high as their options dwindle. It’s possible Jocelyn’s secret has endangered them both. Now it’s Ben’s job to see they survive the fallout…

Book 3 in the Corcoran Team Series

is Book 3 in the Corcoran Team Series 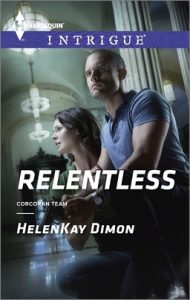 Jocelyn Raine walked under the wrought-iron archway and followed the path to her garden apartment. It was just after nine and the sun had disappeared behind the Annapolis, Maryland, horizon about a half hour ago. Lights inset in the pavers crisscrossed, highlighting the way as she turned right and jogged up the three steps to her front door.

Her cell buzzed at the same time she reached for her keys. While juggling her small purse, she almost dropped the phone. It slipped out of one hand but she caught it in the other before it hit the hard concrete of the small porch.

She swiped her finger over the screen. The promised check-in text from Ben Tanner greeted her. The guy had light brown hair in a short, almost military, cut and the most compelling olive-green eyes she’d ever seen.

She could describe the color exactly because she’s stared into them all night across the dinner table on their first date. Add in the linebacker shoulders and that scruffy thing happening around his chin, and no sane woman could brush him off without a second look.

It all worked…except for the part where he carried a gun. She hated guns. She wasn’t a fan of violence and despised being scared. She hadn’t seen a horror movie since she was a teen. All of which explained why the guy had to ask six times before she finally agreed to go out with him tonight.

Didn’t help that within the first two days of knowing Ben she’d watched him run, shoot, dive, guard and wrestle a scary dude to the ground. All in the critical care unit of the hospital where she worked, and all while sporting an injury. He’d been shot in the upper arm but that hadn’t stopped him from setting up next to a guy in a coma, insisting the unconscious man needed a guard.

And that’s why she had finally said yes to him. Something about the former NCIS special agent broke through her defenses. Just a few minutes ago he had insisted, in that respectful voice, that he walk her to the door. She had said no to avoid the awkward “to kiss or not to kiss” confusion, though he was a temptation.

She texted back that all was well and slipped her keys into the locks, first the deadbolt then the standard one. A woman couldn’t be too careful. She’d learned that the hard way.

Once inside, the three-inch pumps came off first. She sighed in relief when her feet hit the thick area rug. That would teach her to wear sexy shoes. Ben only saw them for a second anyway before she tucked them under the table, so she didn’t get the point.

The light next to the couch bathed the open area in a soft glow. After resetting the lock and dumping everything but the cell on the table just inside the door, she headed for the family room area to her right. Ben could text again, so why not be ready?

She looked around for the remote. The television provided background noise, but she had to turn it on first. Ducking, she checked the floor then the couch cushions. Spinning in a circle, she scanned the room. She always kept it in the basket on the center of her square coffee table. Her gaze went back to that spot, but it still wasn’t there.

An odd chill moved across the back of her neck. She blamed the air conditioner she’d set lower than normal to battle the unusual June heat. But then her gaze came to rest on the magazines spread over the coffee table. She stacked them in a pile. Every day and always.

Some people called her obsessive-compulsive, or OCD. She preferred the term overly neat. Either way, she put stuff in its place and things were not the way she had left them two hours ago.

All thoughts of her sexy date fled.

The chill morphed into a warning itch. She’d been in this situation before and this time she didn’t ignore the alarm bells. With a quick look at her phone, she clicked on Ben’s name and waited for it to ring on his end. The reaction might be overblown but—

She sensed movement. A change in the air in the room. Little things, almost imperceptible things. A heat—a presence—right behind her.

She spun around as her hand dropped and something brushed against her cheek. A sweet smell hit her dead on and she shook her head to evade the pungent scent.

A scream died in her throat when a knife waved in front of her. She looked from the muscled arm to the face hardened by lines around the eyes and mouth. A man, tall, bald and dressed completely in black.

Light bounced off the blade. Her breath hitched in her chest as fear hammered through her, threatening to knock her down. 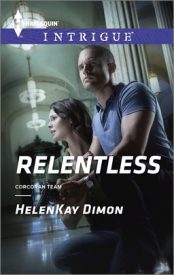 Dimon’s series takes off in high gear and never lets up on the action until the final compelling pages.