Book 4 in the Mystery Men Series 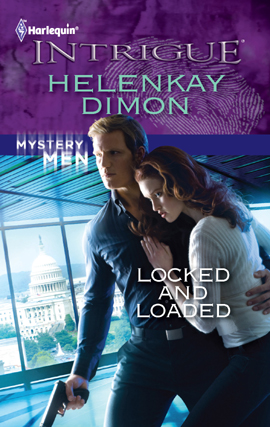 Nothing was as it seemed… Not even the protection Maddie Timmons was promised when she’d entered the Witness Security Program. One of her handlers was missing, the other had burned her, and now Maddie was at risk.

All that stood between her and certain death was one sexy stranger.

Deep undercover, Recovery Project agent Adam Wright vowed to keep Maddie safe from the leak at WitSec. But Adam wasn’t prepared for the confident woman he’d rescued, the sensuous lover who got under his skin. He could do nothing about her past being taken away, but he’d do anything to secure her future…even if it meant forsaking his own….

Book 4 in the Mystery Men Series

is Book 4 in the Mystery Men Series 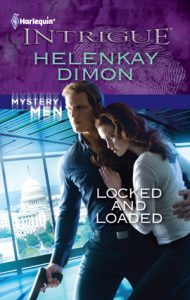 Maddie Timmons turned over in bed for what felt like the fiftieth time. It had to be past two by now. She refused to look at the clock and check. Not again.

The room had plunged into darkness hours ago when the sun ducked behind the mountains outlining the side of her cabin. The cool late spring air couldn’t penetrate the thick windows near her head. She knew because she’d installed the laminated safety glass herself and then made sure the potential entrances stayed locked at all times. A blaring alarm took care of the rest.

She kicked off the covers and stared at the ceiling. Despite all the precautions, something made her restless. She couldn’t put a reason to the feeling. She just knew her insides kept jumping around, pressing down on her chest and forcing her eyes open every time they tried to drift shut.

The unease crept up on her that afternoon while she worked the lunch rush at the cafe. Though in Sweet Home, West Virginia, the weekday “rush” usually meant about thirty people over the span of three hours.

She sat up and felt the mattress dip beneath her. Just as her feet hit the hardwood floor, the banging starting on her front door. She heard the thud and the faint sound of a male voice calling her name.

The hour. The frantic attempt to wake her. It all struck her as wrong.

Every nerve ending in her body screamed for her to run. She had a neighbor but the towering trees and dark night would give her attackers the advantage. And she could not risk getting caught. Ever.

She slid her feet into the white sneakers that always sat by her bed. The knife she kept under her pillow slipped neatly into the waistband of her pajama shorts. She had to grab her bag and take off.

That was the plan. Get to safety and then call the number she memorized for a situation just like this. The same emergency she’d hoped would never arrive.

She crept across the floor and slipped the handle of her packed safety bag through her fingers. She listened closely for any sounds of house penetration. Relief flowed through her when only quiet echoed back.

She rounded the corner and headed for the small secret opening to the space under the house. From there she could see the property and listen for footsteps. Then it was just a practiced run to safety from there.

She froze. The husky whisper sounded louder and deeper than before. And totally familiar.

She eased the duffel back to the floor in total silence. The mandatory escape plan ran through her mind but she ignored it. Instead, she walked down the short hall that lead to the family room. The cabin consisted of exactly two rooms plus a kitchen and bath. No matter how careful she was, how shadowed the rooms, she would come into view from one of the windows in two more steps.

“Maddie?” The knocking grew louder and showed no signs of stopping.

Her brain pleaded for caution. Every other part of her wanted to open the door.

With quiet steps, she across the smooth floor and flattened her stomach against the front door. A quick look through the peephole confirmed what she already knew. Adam Wallace wanted in.

She hesitated, thinking of all the ways this could be a trap, but reached for the locks anyway. Metal rattled in her shaking fingers as she rushed to get the door open.

He stood there, all six-foot-three of him. Sandy blonde hair, thin wire glasses and shoulders wider than the door frame. He was her next door neighbor. The chatty, sexy computer nerd with the linebacker body who moved in and insisted they be friends, all while she dodged every attempt.

She grabbed the side of the door and carefully blocked his way into the house, knowing the entire time he could power through if he really wanted to.

She had never seen him do this frantic whisper thing. Sure, they’d only known each other a month but he’d been so even-keeled all that time. “Adam, I don’t-”

He pushed the frames up on his nose. “I heard a noise.”

The implication of that statement hit her full force. Blood pounded in her ears. “What? Where?

“I was watching a movie and thought I heard something crash over here. I came to make sure you were okay.”

As quickly as the adrenaline flooded her senses it receded again. No need to panic – yet. This likely was about a guy being lonely and nothing more. Why someone his age would choose to live out here, all alone, was a constant mystery. That question made her wary of him, just like she was wary of everyone else. She had to be.

But she did wonder how a man who towered over her and possessed those impressive arm muscles could look so sweet and comfortably disheveled at all times. Probably had something to do with the dimple in his cheek.

But he wasn’t smiling now. Energy thrummed off of him as he glanced all around, barely looking at her.

He finally focused his attention on her. The power of those grass green eyes almost knocked her flat. Intelligence lingered there and something else. Something she couldn’t pin down. His size signaled danger but his easygoing manner made her think geek. The guy was an enigma.

“No.” The answer was automatic. Forget her curiosity and the hint of attraction. The response was the right one.

Her grip tightened on the door. “It’s late.”

The frenzied moments faded as his eyebrow inched up. “I came over to make sure nothing had happened to you.”

“And I’m fine, so we’re good.” She couldn’t let him in physically or emotionally. If he truly heard something, if danger lingered in the woods surrounding her unwanted adopted home, then she had to run. Dragging a computer nerd with her would only slow her down. And the rules were clear: travel alone and light. 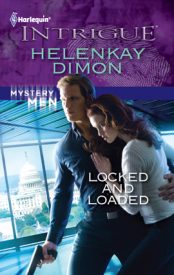 For all the bells and whistles in Dimon’s latest, what fascinates most is the human factor.

Adam has sexy geek written all over him, and I’ll admit that I’m shallow enough that I actually swooned.

— The Good, The Bad and The Unread