Book 5 in the Mystery Men Series 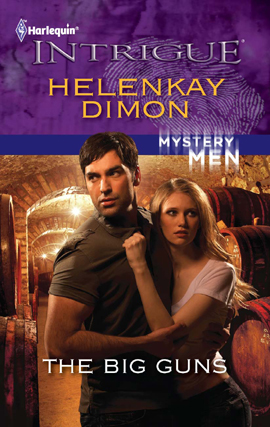 When he saw his mark being kidnapped, Recovery Project agent Zach Bachman had no option but to rescue her. Even if it endangered his assignment. After weeks of watching Sela Andrews from afar, he was now trapped with the blonde beauty as her bodyguard.

Her brave protector relished the heat of gun battle but retreated from his own emotions. Sela learned that when, in the dead of night in a darkened safe house, the loner became her lover. Still, as her would-be killers closed in on them again, she had no choice but to put her life—and her heart—in the hands of her reluctant guardian.

Book 5 in the Mystery Men Series

is Book 5 in the Mystery Men Series 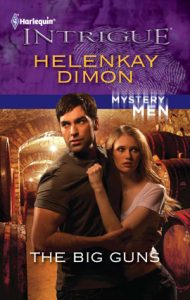 Sela Andrews was five minutes away from walking into an ambush. Slumped down in his Jeep on the street outside her apartment, Zach Bachman watched the set-up unfold.

The small split screen monitor on his watch showed Sela approaching the elevator on the floor five stories above. That wasn’t the problem, except for how clueless she appeared to be to the danger around her. The other shot centered on the building’s underground garage. There, in stall seventeen, not far from where Zach sat, a man fiddled with something under the hood of her car.

And not just any man. A guy dressed in black, his gaze skipping around the garage as if looking for witnesses. He’d even taken the time to disable the security camera. He just didn’t know he’d missed one – Zach’s.

Thanks to this development, Zach knew he had to break his word. When he convinced Adam Wright, his fellow Recovery Project agent, to tap into the cameras in Sela’s building, Zach promised to watch but not get involved. That wasn’t possible now. He pressed the green button on the bottom of his watch and sent Adam an emergency pulse. Just in case.

That left Sela. Going through the garage door was the faster route to cutting her off, but also the most likely to give away his position and get shot. Not his favorite activity, certainly not at this painfully early time of day. No, he had to do this the long and hard way.

Out of the car, he hit the building’s lobby at a run, stopping only to use the master key Adam made for just this type of problem. Zach’s sneakers squeaked against the tile floor as he crossed in front of the elevator bank. He knew the schematics without thinking and headed for the emergency stairwell in the back corner.

Racing down the stairs two at a time to the underground garage, his palm slid against the metal railing as he flew. The stale hot air of the enclosed space filled his lungs, but he didn’t stop. As they passed, he ignored the man stumbling up the stairs from what looked like a hard night of drinking. None of that mattered because Zach had to get there before she did.

He hit the landing, stopping only when momentum slammed his shoulder against the stairwell door. His breathing stayed steady and strong, a testament to his former military career and good conditioning. He pressed his hand against the door and waited for the ding of the elevator bell to signal Sela’s entry into the garage.

Only silence greeted him.

The door creaked as he pulled it open and peered into the dark garage through the tiny slit. Nothing. Too much nothing. Everything was quiet.

No squealing tires. No engines running. At just after four in the morning on a summer weekend, no one else was in the garage. Not even a security guard. That might be usual for some parts of the country, but not for a city. This area of D.C. buzzed with some level of activity most of the time, but not this morning.

The emergency cones set up at the garage’s entrance likely played a role in that. Looked like this guy had thought of everything to give him the precious time needed to get to Sela. The real concern centered on the guy knowing Sela would be on the move in the early morning hours on a Sunday. Zach watched her for weeks and hadn’t anticipated her going out now. But this guy knew.

Not wanting to be too many steps behind, Zach slipped into the garage, keeping his back flat against the concrete wall. With one hand he caught the door before it slammed shut behind him. With the other he reached for the gun tucked into the holder on his hip.

Then he saw it. Behind a row of cars, something flashed. Possibly nothing, but just as likely a reflection of the attacker from all the metal overhead. It gave Zach a place to focus.

He slid down against the wall, debating whether to make his move and take the attacker out before he touched Sela or hold. Steady. The elevator bell hid his footsteps and ruined any chance of an offensive strike. He had no choice. The most dangerous option won out.

With a harsh hiss of profanity, he slunk back into the shadows. His insides screamed to grab Sela to safety, but his head knew the right answer. Bide his time. This – whatever was happening right now – could be the key to finding the information he needed on Trevor Walters, Sela’s boss, and the Recovery Project’s nemesis.

Zach couldn’t stop now, not when he was this close to his goal. He’d made a personal vow to find the evidence needed to catch Trevor once and for all, and Zach meant to keep it. 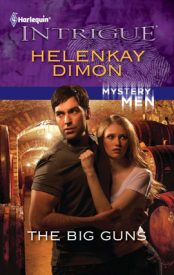 The action and suspense begins on the very first page and doesn’t let up until the last chapter, with startling revelations and plenty of explosive action.

This has been a fun, exciting series, and here’s hoping for lots more Intrigues from Dimon.

— The Good, The Bad and The Unread